THEME: Choosing goodness secures life with and for God

BACKGROUND: The Gospel of Matthew and Matthew 6: 1-6 and 16-18, refer regularly to Jewish religious leaders, the local town synagogue, the Mosaic Law and the Torah as well as to the small Christian communities (eklesia) emerging after the leveling of the Temple in Jerusalem. The gospel appears to be written for Jewish Christians who do not need further explanation about their collective history or liturgical practices. Matthew’s audience may be the Jewish Christian community struggling to find itself among their neighbors in the local synagogue. The writer uses phrases like “From that time on” to make transitions between narration and discourse. Matthew Chapter 6 follows the discursive style. Some scholars view the Gospel of Matthew as the successful editor – interpreter and clarifier – of the Gospel of Mark.

ALMS, FASTING AND PRAYER: The gospel writer presents Jesus as rabbi – a sound teacher of the Torah – interpreting the meaning of religious actions directed at God whom he calls Abba, the faithful father. Jesus believes that Abba sees every intention in pious action whether it is hidden or visible. Rather than using a parable to develop his ideas about personal piety, Jesus looks at his audience and selects their ordinary religious practices: alms giving, prayer and fasting. He uses what he has seen with his own eyes. To incorporate his insights into their lives, his listeners can draw from their own personal, public or observable experiences of being in a good relationship with God.

I like the bold image of bravado suggested by Jesus: observe a man strutting in public and saying, “Look at me. I help the poor with alms; I move with fervent public gestures in prayer; I linger in hunger and fast no matter what the cost. (How great I am!)” Jesus invites his listeners to imagine how a loving and attentive God may view such impious behavior. He advises keeping God as the central focus in good deeds rather than the opinion of one’s neighbors.

A PERSONAL STORY: This selection from Matthew reminded me of a winter Sunday 70 long years ago. About eleven years old, I was in a car with my parents driving by our parish church: we were beginning a Sunday outing – off to see something beautiful in San Francisco, California and end with dinner. Then, by the church my dad noticed a man with a sad face walking down the steps from the priests’ house. Dad parked our car and walked over to the man who looked so downhearted. Both talked then together stepped over to another parked car filled luggage and another family. The man explained that he had asked for help to buy gas for the car or to get some food for his family. They were on their way to a new job in another town. Dad listened to the man’s story then offered him some money. Both shook hands and each returned to his car. As he slid into the driver’s seat, Dad said, “Well, there goes a good man. Today, we are taking a drive by the ocean rather than going to a show and dinner. That family needed our money for survival. We’ll have a good day walking along Ocean Beach and San Francisco Yacht Harbor. Maybe we can pick up some hot dogs along the way home. Let’s pray now that that man and his family have a good Sunday too.”

I have not forgotten what it means to give alms or to pray and fast for others. Today, I know that in that gift of one family to another, Jesus Christ, took flesh and two families had good Sundays.

I invite you to let your imagination pull up a story of your own.

“When you fast, do not look gloomy like the hypocrites. They neglect their appearance, so that they may appear to others to be fasting. Amen, I say to you, they have received their reward. But when you fast, anoint your head and wash your face, so that you may not appear to be fasting, except to your Father who is hidden. And your Father who sees what is hidden will repay you.”

Sr. Barbara Thiella, SNDdeN, daughter of John D. and Edna F. Dutcher Thiella, was born in San Francisco, California, on April 26, 1939. She was the first of two children. Her brother John is an attorney. Barbara entered the California Province of the Sisters of Notre Dame de Namur in 1957, receiving the name Sr. Andrea. She attended Notre Dame de Namur University in Belmont, earning a degree in liberal arts and a California teaching credential. Then, she studied at the University of San Francisco and obtained a graduate degree in theology and a California credential in school administration. Later, she received a credential from the State of Hawaii. Sister Barbara has spent half of her years of ministry in formal education and the other half in leadership roles for the Sisters of Notre Dame de Namur and the Catholic Church at the diocesan level. Within Notre Dame schools, Sister Barbara has served as a teacher and administrator in the Dioceses of San Francisco, Monterey, Sacramento and Honolulu. She also worked at the University of the Pacific, Stockton, as a Campus Minister. As Vice Chancellor in the Diocese of Oakland, Sister Barbara facilitated the Second Pastoral Convocation and the ensuing Diocesan Pastoral Council. The California Province of the Sisters of Notre Dame called her first to direct personnel planning and then to be a member of the California Leadership team. Since 2000, Sister Barbara has been Chancellor in the Diocese of Stockton with a particular care for diocesan ministries that offer resources and training to 34 parishes and 12 missions. Sister Barbara has used her training and skills in pastoral theology and administration, research and development, in service to the Sisters of Notre Dame de Namur, dioceses in the Northern California Province, other religious communities, schools and seminaries. As a woman of the Church, Sister Barbara offers her life to affirm goodness in persons and institutions and to build together with others towards an inclusive community. As a Sister of Notre Dame, she cherishes the gospel call to seek for goodness in all aspects of life. The communal dedication of the Sisters of Notre Dame challenges and strengthens her own following of Jesus Christ. 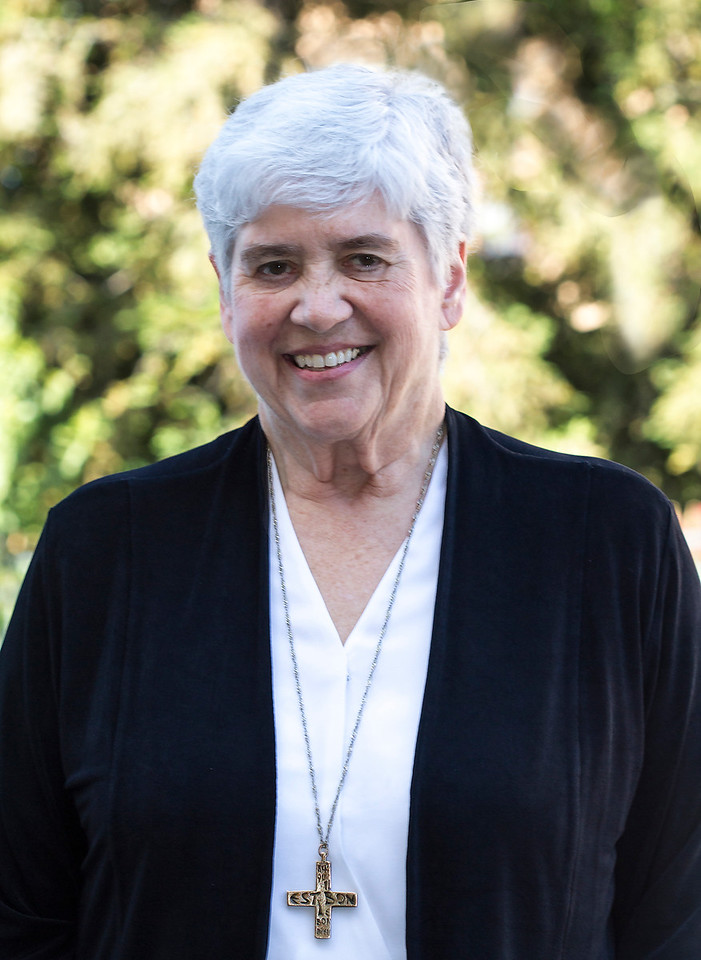