Waiting in Hope with Mary

In today’s Gospel the women return bringing perfume for Jesus’ body. Today’s feast has a restoring power that even where a situation of pain is anticipated and celebrated joyfully as a feast day of life.

Reflecting on this Gospel text in order to prepare this message, I found myself thinking of pain and of healing. The women had experienced profound suffering, caused either by the violence against Jesus, by absence or by fear or doubt about the future. But, in spite of this suffering, together they faced fear and doubt and brought healing perfumes. They brought a feminine touch which makes a difference in the world.
The direction that this reflection took reflects the actual moment that humanity is experiencing. We live in times of extreme pain, of doubt and insecurity and we are still in a process of slow healing that demands of us perseverance, creativity, courage, sensitivity, integrity and trust in each other and in the generosity of the Great Tenderness.

In today’s text we also see the image that appears as the two figures in bright clothes. “Why do you look for the one who is alive among the dead?”

It is necessary to visit the place of pain but it is also necessary to leave it behind with joy and strength in order to announce that life has conquered. It is necessary to open the windows and proclaim hope not only in words but in actions. And these actions we should always take with others, never alone.
Concluding, I would say that this invitation to us in this text says that, with our feminine touch, we will continue to treat and heal with sensitivity the wounds and pain of our world. Also, that with boldness, sisterhood and feminine creativity, we will guide the world in the direction of urgent and overdue transformations needed in order to save the lives that suffer in every form imaginable.

It is also necessary to tune our ears to hear the voices that announce hope. And with them, we echo our song of hope. We need to see clearly and accurately those persons and groups that live in hope, that proclaim life and that promote peace. We need to feel the pulse of earth, the pulse of the daughters and sons of earth who throughout their lives emanate life and hope.
We go forth, heads held high. We are daughters and sons of hope!

At daybreak on the first day of the week the women who had come from Galilee with Jesus took the spices they had prepared and went to the tomb. They found the stone rolled away from the tomb; but when they entered, they did not find the body of the Lord Jesus. While they were puzzling over this, behold, two men in dazzling garments appeared to them. They were terrified and bowed their faces to the ground. They said to them, “Why do you seek the living one among the dead? He is not here, but he has been raised. Remember what he said to you while he was still in Galilee, that the Son of Man must be handed over to sinners and be crucified, and rise on the third day.” And they remembered his words. Then they returned from the tomb and announced all these things to the eleven and to all the others. The women were Mary Magdalene, Joanna, and Mary the mother of James; the others who accompanied them also told this to the apostles, but their story seemed like nonsense and they did not believe them. But Peter got up and ran to the tomb, bent down, and saw the burial cloths alone; then he went home amazed at what had happened.

Sister Sandra Araújo dos Santos was born on March 23, 1977 in the State of Maranhão, Brazil. Her parents are farmers and for this reason, looking for land, they migrated to the State of Pará. In Maranhão, it is too hard to get land. In Anapu, Pará, Sandra got to know the sisters of Notre Dame de Namur. The first Notre Dame Sister that she met was Sr. Dorothy Stang. This happened as soon as her family arrived in Anapu. Then, as Sandra grew up, she participated in the events held by the Sisters of Notre Dame. In 1995, she began to live with the Sisters and became a postulant in 1997. She made her perpetual Vows as an SND in January 2008. Since 2018, Sr. Sandra lives in Breves, a city located in the Marajo Island, in the northern part of Brasil. She shares life in community with sisters Lucyane, Carla and Anne Wihbey. Sister Sandra realizes her mission in the Pastoral of Land and other works in the city of Breves. 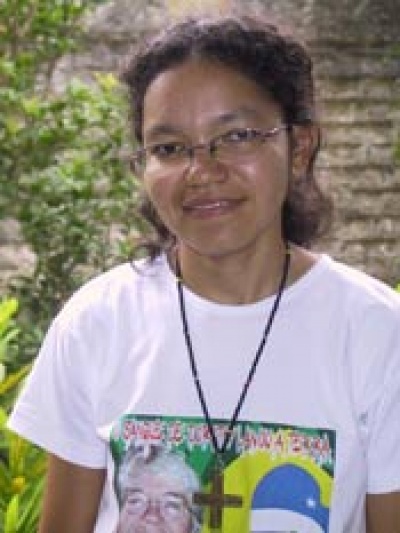