Feast of the Annunciation

Sometimes we find that the words we use obscure the real meaning.  IF this feast were called “the Announcement” would it lift the veil of mystery just a little?  What was announced was the Incarnation, the incredibly generous movement of our God to make a home in our world, in our human culture, on our planet.  Young Miriam does what we all need to do when we hear this announcement—open ourselves to Emmanuel, God with us. (First reading, Is.7:14) “Here I am, Lord, ready to do your will.”  (Psalm 39).  But God’s “announcer”, Gabriel, is met with deep disturbance and fear by Zechariah (Luke 1:20) and with a “deeply troubled” Miriam. (Luke 1:26) Gabriel’s announcements were about impending pregnancies and should have been met with overwhelming joy—but in each case there were complicating circumstances.  Nevertheless, “nothing is impossible with God.”

In the sixth month the angel Gabriel was sent by God to a town in Galilee called Nazareth, to a virgin betrothed to a man named Joseph, of the House of David; and the virgin’s name was Mary. He went in and said to her, “Rejoice, so highly favoured! The Lord is with you.” She was deeply disturbed by these words and asked herself what this greeting could mean, but the angel said to her. “Mary, do not be afraid; you have won God’s favour. Listen! You are to conceive and bear a son, and you must name him Jesus. He will be great and will be called Son of the Most High. The Lord God will give him the throne of his ancestor David; he will rule over the House of Jacob for ever and his reign will have no end.”

Mary said to the angel, “But how can this come about, since I am a virgin?” “The Holy Spirit will come upon you” the angel answered “and the power of the Most High will cover you with its shadow. And so the child will be holy and will be called Son of God. Know this too: your kinswoman Elizabeth has, in her old age, herself conceived a son, and she whom people called barren is now in her sixth month, for nothing is impossible to God.”

“I am the handmaid of the Lord,” said Mary “Let what you have said be done to me.” And the angel left her.

Feast of the Annunciation 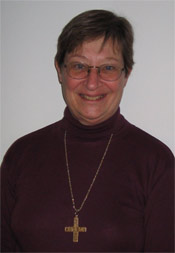