Feast of the Holy Family

The celebration of this feast each year soon after Christmas is always a reminder to me of the thoroughness of the Incarnation … the full humanity that the Word of God, Jesus, took when he was born to Mary and Joseph some 2000 years ago. He was a member of a fully human family, subject to all its joys and struggles, its limitations and delights, for a large portion of his life. The title of today’s feast, HOLY Family, may lead us to think that it was different from any other family in its struggle to be family in the context of the time. I am quite sure that Joseph and Mary’s neighbours would not have given them that description as they went about their daily tasks, making a living, keeping the house, nurturing this child, and forming him into their Jewish faith and culture. If they were fully human they would have had the normal disagreements and misunderstandings that are part of family life, and indeed Luke records one of these some verses on in his gospel when the 12-year-old boy Jesus stayed behind in Jerusalem instead of accompanying his parents on their journey home.

But that is sometime after the scene described in today’s Gospel. Here Mary and Joseph are recorded as being law-abiding and faith-filled parents taking their first-born son to Jerusalem to present him to the Lord as laid down in the Law of Moses. They were not expecting the sober message they received about their son and his significance in the life of their people, and all people. Each of us is born into a biological family and into a particular culture. No choice about either of those two sets of circumstances which are responsible for so much of how we develop in life! If we are fortunate enough, as Jesus was, we are also introduced early on, or later in life into a faith family, and throughout life we have choices about what we do with that. Today’s Gospel story introduces two elderly members of Joseph and Mary’s faith community, Simeon and Anna, whose life message is about trust, fidelity and being true to their call.

Today’s gospel paints a picture of an intergenerational encounter full of rich symbolism and imagery related to a particular faith tradition of which we are the heirs. Christmas, one of our rich traditions, is often a time for family gatherings that bring different generations together. This Christmas, Covid-19 Christmas, may have prevented that from happening in the best interests of the health of both family and society members. Today’s liturgy may therefore be one celebrated virtually and not in the presence of other members of our regular faith community, bringing with it perhaps some sadness and regret. Our world today is struggling against enormous inequalities, injustices and irregularities. It is into such a real world that Jesus is being introduced today, and that each of us is called to be the Good News. Resurrection is the end product of a life of faithfulness and living true to our consciences, as Simeon and Anna obviously had. The first and second readings for today’s feast give us some clues about what that life should be like.

“Now, Master, you may let your servant go in peace, according to your word, for my eyes have seen your salvation, which you prepared in sight of all the peoples, a light for revelation to the Gentiles, and glory for your people Israel.”
The child’s father and mother were amazed at what was said about him; and Simeon blessed them and said to Mary his mother, “Behold, this child is destined for the fall and rise of many in Israel, and to be a sign that will be contradicted –and you yourself a sword will pierce– so that the thoughts of many hearts may be revealed.”

Brigid Rose Tiernan has been in Notre Dame since 1963. She was born in Bulawayo Zimbabwe, grew up in Zambia, but attended the Notre Dame Convent in Kroonstad, South Africa, where she discovered her call to be a Sister of Notre Dame de Namur. She obtained a BA degree before joining the SNDs, and as an SND had the opportunity to study further in the field of Education. She has been a High School Teacher, a trainer for Justice and Peace – a life-long passion – and, latterly, has added Organizational Development and Facilitation skills to her repertoire. She lives in Johannesburg and continues her leadership in her ministry of education. She works in the ZimSA (Zimbabwe/South Africa) archives…and loves the opportunity it gives her to get in touch with the stories that have made the Sisters of Notre Dame who they are today.

Feast of the Holy Family 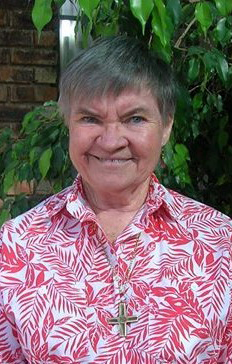