Feast of the Immaculate Conception

DOES IT REALLY MATTER?

Mary, what are we to believe about you? How do we strip away the myths, the folklore, the falsehoods, and the mysteries surrounding your personhood? How do we look under the cultural and theological accoutrements that you have been clothed in for centuries and find the real YOU? How do we today relate to you as ‘woman’ and ‘sister’ and not by the titles that have accumulated over the years that attempt to define you?You are a woman who said ‘yes’ to the God of your life, not knowing what that would entail or where it would lead you. You are a woman who loved and trusted Joseph enough to raise a child with him.You are a Middle Eastern woman, brown skinned, veiled, and sandaled. The only aura you had around you was from the dust storms that came upon Nazareth during the dry season.

We surmise that you were a widow since we know that Joseph would have been with you when Jesus was tortured and died. You grew to love the men and other women that travelled with Jesus before and after his death, becoming a companion and wisdom figure to them. You lived, you loved, you cared.

Were you conceived without sin as today’s feast celebrated? Does it matter? Does it take anything away from you or add anything to you? You are a woman who knew how to believe and how to love her God and to find the goodness of this God in the people and the world in which you lived. Can we be anything less?

In the sixth month the angel Gabriel was sent by God to a town in Galilee called Nazareth, to a virgin betrothed to a man named Joseph, of the House of David; and the virgin’s name was Mary. He went in and said to her, “Rejoice, so highly favoured! The Lord is with you.” She was deeply disturbed by these words and asked herself what this greeting could mean, but the angel said to her. “Mary, do not be afraid; you have won God’s favour. Listen! You are to conceive and bear a son, and you must name him Jesus. He will be great and will be called Son of the Most High. The Lord God will give him the throne of his ancestor David; he will rule over the House of Jacob for ever and his reign will have no end.”
Mary said to the angel, “But how can this come about, since I am a virgin?” “The Holy Spirit will come upon you” the angel answered “and the power of the Most High will cover you with its shadow. And so the child will be holy and will be called Son of God. Know this too: your kinswoman Elizabeth has, in her old age, herself conceived a son, and she whom people called barren is now in her sixth month, for nothing is impossible to God.”
“I am the handmaid of the Lord,” said Mary “Let what you have said be done to me.” And the angel left her.

Anne Louise spent many years in higher education as campus minister, counselor, Director of the Personal Counseling Center and as Associate Dean of Students at Sacred Heart University, Bridgeport, CT. She also served on the Connecticut Leadership Team as well as co-coordinator of the SND/USA Anti-Racism Team. She was Case Management Supervisor at My Sister’s Place Women Center, a day shelter for homeless women and children in Baltimore City, Maryland. and served 8 years as Director of Programs at Pax Christi USA. Anne Louise currently works on a bi-racial team presenting, facilitating and consulting with religious communities on dismantling racism within their Congregations.

Feast of the Immaculate Conception 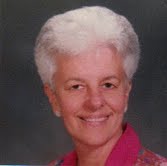