The readings for today present us with a sower sowing seed. I would like to look at three elements in the scene. How does the sower sow? Who is the sower? What is the message God is giving us?

How does the sower sow?

First, the sower sows lavishly, with great abandon, not worrying about where the seed lands. He/she sows generously, from a place of abundance rather than a place of scarcity. Second, the sower sows courageously, not checking the terrain, but accepting it as it is. Third, the sower sows inclusively, spreading the seed far and wide, trusting it will land where it should.

Who is the sower?

Today’s first reading speaks of God’s word going forth from God’s mouth to achieve the end for which God sent it. The sower, then, is God, who gives the increase to our efforts. The second reading affirms God’s fruitful action in our lives and in all creation, which hopes “to be set free . . . and share in the glorious freedom of the children of God (Romans 8:18—23).” The sower is also Jesus, the Word of God, whose words and life reveal God’s love and call us to new life.

What message is God giving us?

Sow generously, using well the gifts God gives you, trusting God will give the increase and your mission will succeed. Sow freely, knowing that God has compassion on our human weakness and does not ask for more than we can do. Hope in good faith, putting forth your best effort even in challenging situations. Sow inclusively, ever widening your circle of love and reaching out to those who are different or difficult. Sow courageously, speaking out for justice and right relationships even when these topics get a cold reception. Speak the truth in love, knowing you do not sow alone.

On that day, Jesus went out of the house and sat down by the sea. Such large crowds gathered around him that he got into a boat and sat down, and the whole crowd stood along the shore. And he spoke to them at length in parables, saying: “A sower went out to sow. And as he sowed, some seed fell on the path, and birds came and ate it up. Some fell on rocky ground, where it had little soil. It sprang up at once because the soil was not deep, and when the sun rose it was scorched, and it withered for lack of roots. Some seed fell among thorns, and the thorns grew up and choked it. But some seed fell on rich soil, and produced fruit, a hundred or sixty or thirty-fold. Whoever has ears ought to hear.”

The disciples approached him and said, “Why do you speak to them in parables?” He said to them in reply, “Because knowledge of the mysteries of the kingdom of heaven has been granted to you, but to them it has not been granted. To anyone who has, more will be given and he will grow rich; from anyone who has not, even what he has will be taken away. This is why I speak to them in parables, because they look but do not see and hear but do not listen or understand. Isaiah’s prophecy is fulfilled in them, which says: You shall indeed hear but not understand, you shall indeed look but never see. Gross is the heart of this people, they will hardly hear with their ears, they have closed their eyes, lest they see with their eyes and hear with their ears and understand with their hearts and be converted, and I heal them.

https://www.sndden.org/wp-content/uploads/Marilyn-Pecchillo-flipped-for-web.jpg Sr. Marilyn Pechillo grew up in Baltimore, MD and Stratford, CT.  She met the SNDs in high school and entered Notre Dame in 1961. Sr. Marilyn studied Classics at Emmanuel College, Trinity in Hartford and Loyola University of Chicago. She taught in high school and college for many years, including several years at Trinity College (now Trinity University) in Washington, D.C. and two years at Loyola of Chicago’s Rome Center.  Sr. Marilyn also served in province leadership. In more recent years, Sr. Marilyn has worked in pastoral ministry with SNDs and lay residents at Notre Dame Health Care in Worcester, where she served as Pastoral Care Associate and transition companion.   Sr. Marilyn also serves on the US SND Anti-racism team Content goes here 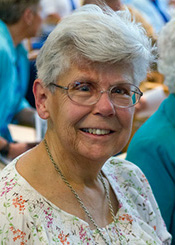