From the Earth Speaks Truth

As I prayed John 8: 1-11, the woman taken in adultery, I began to see a drama unfold before my eyes. Jesus is preaching in front of the Temple. The Scribes and the Pharisees bring a woman caught in the act of adultery and throw her to the ground where Jesus is preaching. They set up a trap to get Jesus to condemn her. They want him to say it was the Law of Moses that the woman must be stoned to death.

Jesus knows that the Law of Moses said that both parties were to be stoned. Jesus, however, chooses not to enter into a debate with the Scribes and Pharisees. He bends down and starts writing something in the dirt. They are irritated with his silence as he continues to write and they continue to press Jesus. He gets up and speaks to all of them, “The sinless one among you, go first. Throw the stone.” When the Scribes and Pharisees heard this, they began to leave, starting with the oldest .

Bending down again, he continues to write. No one knows for sure what Jesus wrote. Some suggest that it was a question, “Where is the man?” We don’t really know for sure. What we know is that as He continued to write, the attackers put down their stones and stole away in silence.

The woman was left alone. Jesus then stood up and spoke to her. “ Woman, where are they? Does no one condemn you?” “No one, Master” she replies. “Neither do I,” said Jesus. “Go on your way. From now on, don’t sin.”

The woman, the Scribes, and the Pharisees, actually all those present receive the challenge to a new and different life. The woman responds with courage and confidence. She experiences the compassion and understanding which gave her the strength needed to stand up respond to Jesus’ question. The nameless young woman caught in the act of adultery entered into communion with the silent preacher who healed her wounds, touched her heart and set her out on a new way. She feared death at the hands of those learned religious men. Jesus touched her head and heart. She stands up to converse with him. It was a short conversation, a deep commitment, a new day, a new life, a new sense of solidarity.

The Scribes and the Pharisees could have learned a new way of sharing love, of admitting error and asking forgiveness, a new way of seeing the meaning of creation in the image of God. They received the same offer of forgiveness as the woman, but they were unable to acknowledge their sin. They preferred to live in the false comfort of darkness.

We live in troubled times. The pandemic rages all over the world. There is a war in Ukraine. I see Jesus bending to write words of truth on the ground and encouraging action to build bonds of community in our troubled world. Neighboring countries are being stretched to welcome the women and children who are escaping from the death and destruction. Men and women are choosing to stay, and fight for life, willing to give their lives for the future of their country.

What then, I ask myself, are the words of truth that Jesus writes on the ground for for me in these troubled times? Where am I called to stretch my boundaries and build peace? How can I with courage face the questions and with confidence greet the new day? How can the woman taken in adultery help me listen to the truth that the ground speaks?

Jesus went to the Mount of Olives. But early in the morning he arrived again in the temple area, and all the people started coming to him, and he sat down and taught them.

Then the scribes and the Pharisees brought a woman who had been caught in adultery and made her stand in the middle. They said to him, “Teacher, this woman was caught in the very act of committing adultery. Now in the law, Moses commanded us to stone such women. So what do you say?” They said this to test him, so that they could have some charge to bring against him.

Jesus bent down and began to write on the ground with his finger. But when they continued asking him, he straightened up and said to them, “Let the one among you who is without sin be the first to throw a stone at her.” Again he bent down and wrote on the ground. And in response, they went away one by one, beginning with the elders. So he was left alone with the woman before him. Then Jesus straightened up and said to her, “Woman, where are they? Has no one condemned you?” She replied, “No one, sir.” Then Jesus said, “Neither do I condemn you. Go, and from now on do not sin any more.”

Betsy Mary Flynn entered the Sisters of Notre Dame de Namur in 1960. She taught high school at Central Catholic in Norwalk, Ct. East Catholic in Manchester. Ct. and Notre Dame, Bridgeport Ct. She was a member of an ecumenical team working with migrant tobacco workers to obtain their legal rights. From there worked as a counselor at Greater Hartford Community College assisting women wanting to continue their education by returning to school. In 1981, Sr. Betsy was missioned to Brazil where she served in Sao Domingos, Ma., Assuncao, Ce., Itapipoca, Ce., and Fortaleza, Ce. She arrived in Ceara at a time of serious drought: many deaths, very grave shortage of water, crops destroyed, animals dying. It was the time after the Vatican Council and we were involved in participating in reflecting Life and the Bible in small groups all over the diocese. In 1997, Sr. Betsy went to Lima, Peru to study the Bible with leading Latin American Scripture theologians and delegates from all countries of Latin America. The Brasil team consisted of 5 from different parts of Brasil. She lived with the Sisters of Notre Dame in Delicious and got to know and appreciate the work of the Peruvian Province. On returning to Fortaleza, she began work with an Audiovisual team which made videos related to community problems of the interior and city. The work with women studying the Bible from the perspective of gender grew into the formation of AGAR, which continues to grow and be active in Ceará, She was a member of the Group “Grito pela Vida” ( Cries for Life) an international network dedicated to education about and concrete action to eliminate the trafficking of adults and children. The years 2000 to 2015, was time of insertion in living experience with two poor neighborhoods in the capital city of Fortaleza. In September of 2015, Sr. Betsy returned to the States for reasons of health. She presently lives in Julie House, a community of 19 Sisters. Prior to the Corona Virus Pandemic, she worked as a volunteer translator with Malta, a health project which gives quality care for the poor in three different sections of Harford and one in East Hartford. She is a team member of the SND immigration project and has worked with migrants seeking asylum in McAllen Texas, and those camping out in the occupation at the bank of the Rio Grande in Matamoros, Mexico. 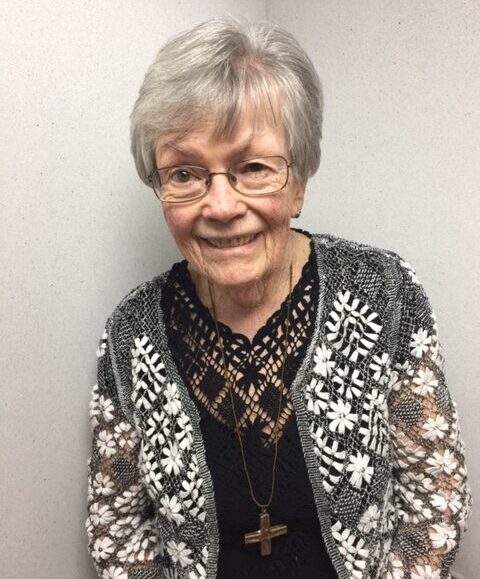