Solve life’s problems with prayer and discernment
There is a common understanding that out of insignificant can come the infinitely important things Jesus teaches us today, to see opportunities in every problem we go through. At each problem there is a potential hidden in it. The only challenge is how to solve that problem.

In the first reading, Luke presents the problems that faced the early church and how they were resolved. There was the tension between the Jewish Christians and the Gentile Christians: the Hellenistic group complaining that their poor widows were being neglected in the daily distribution of food from the common store by the majority group, the local Hebrews. The second problem was that some of the members were so overworked in the service of the community that they were neglecting other important duties.

The solution was arrived at by prayer and discernment, by creating the office of deaconing or service. This showed flexibility and growth, optimism and imagination. It showed the church as an organization with an atmosphere of love, consideration, and enthusiasm. It showed a church with each person treated equally with love, in the forefront of breaking down ethnic and racial barriers. They resolved the problem through prayer and discernment.

God has called us to the life of building, not destroying. Peter in the second reading uses an analogy of building the house in reference to building up of the body of Christ—the church. We read today:
“The very stone which the builders rejected has become the head of the corner; this was the Lord’s doing and it is marvelous in our eyes” (Matthew 21:42; Mark 12:10; Luke 20:17). That is a quotation from Psalm 118:22. In its original meaning it is reference to the nation of Israel. Israel is the head corner-stone. The powers of the world flung it aside as useless, but God destined it for the most honorable and important place in the building of his kingdom in the world.

The words express Israel’s consciousness of its mission and destiny in the purpose of God. Jesus took these words and applied them to himself. It looked as if he was utterly rejected by men; but in the purpose of God he was the corner-stone of the edifice of the Kingdom, honored above all. To those who accept him he will become a sanctuary and a salvation, but to those who reject him he will become a terror and a destruction. Approach him in prayer and he will build you up.

The gospel is from the part of Jesus profound farewell discourse, which is tinged with glory. “Don’t let your hearts be troubled,” Jesus says remembering perhaps his own troubled emotions. His advice is that we center our untroubled heart in a living faith in the Father and in himself.

In a very short time, life for the disciples was going to fall in. Their world was going to collapse in chaos around them. At such a time there was only one thing to do—stubbornly to hold on to trust in God. There comes a time when we have to believe where we cannot prove and to accept where we cannot understand. If, in the darkest hour, we believe that somehow there is a purpose in life and that that purpose is love, even the unbearable becomes bearable and even in the darkness there is a glimmer of light.

Jesus adds something to that. He says not only: “Believe in God.” He says also: “Believe in me.” For Jesus is the proof that God is willing to give us everything he has to give. If we believe that in Jesus we see the picture of God, then, in face of that amazing love, it becomes, not easy, but at least possible, to accept even what we cannot understand, and in the storms of life to retain a faith that is serene. Don’t be afraid. Men may shut their doors upon you. But God will never shut out. He himself gives a promise that he is the Way, the Truth and the Life

As the way He takes us by the hand and leads us; he strengthens us and guides us personally every day. He does not tell us about the way; he is the Way. He is the Truth. He gives himself to us as the example to emulate in our dealing with moral truth. He is the Life. He makes our life worth living. Life with Jesus is life indeed.

Today our God knows the difficulty of making ends meet; he knows the difficulty of the ill-mannered customer and the client who will not pay his bills. He knows all the difficulty of living in an ordinary home and in a big family, and he knows every problem which besets us in the work of every day. God knows what it is to be tempted. How do solve these and many other challenges of life?
Jesus shows us a God who goes through the struggle that we must undergo. God who cares intensely, God who yearns over men, feels for them and with them, and loves them. Let us approach our problems in prayer and discernment. With the eyes of faith we turn problems into opportunities.

Jesus said to his disciples:
“Do not let your hearts be troubled.
You have faith in God; have faith also in me.
In my Father’s house there are many dwelling places.
If there were not,
would I have told you that I am going to prepare a place for you?
And if I go and prepare a place for you,
I will come back again and take you to myself,
so that where I am you also may be.
Where I am going you know the way.”
Thomas said to him,
“Master, we do not know where you are going;
how can we know the way?”
Jesus said to him, “I am the way and the truth and the life.
No one comes to the Father except through me.
If you know me, then you will also know my Father.
From now on you do know him and have seen him.”
Philip said to him,
“Master, show us the Father, and that will be enough for us.”
Jesus said to him, “Have I been with you for so long a time
and you still do not know me, Philip?
Whoever has seen me has seen the Father.
How can you say, ‘Show us the Father’?
Do you not believe that I am in the Father and the Father is in me?
The words that I speak to you I do not speak on my own.
The Father who dwells in me is doing his works.
Believe me that I am in the Father and the Father is in me,
or else, believe because of the works themselves.
Amen, amen, I say to you,
whoever believes in me will do the works that I do,
and will do greater ones than these,
because I am going to the Father.”

I am Elizabeth Nekesa, Sisters of Notre Dame Kenya Unit

I am in my seventh year of initial commitment, currently living in the Malava postulate community, which is in the western part of Kenya. I coordinate the postulants program.

Amidst the current pandemic, I encourage each one of us to put a smile on her face and say quietly “Ah how good is the good God.” 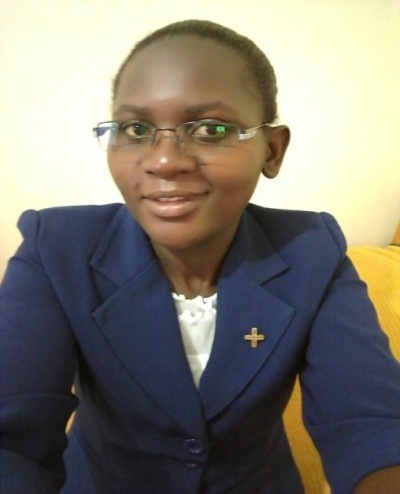