Today, the first Sunday of Lent, we reflect on the temptations Jesus faced in the desert for forty days and forty nights.

This passage comes shortly after the baptism of Jesus and the memory of the genealogy of Jesus which calls to mind from where Jesus came, son of the People of God. Filled with the Spirit, he was led by the Spirit into the desert.

What is the desert? What comes to mind? In the time of Moses, people came out of slavery in Egypt, and spent 40 years in the desert learning to be the People of God. To be the People of God is to trust one another, to trust in God, to organize to take care of everyone, to deal with leadership problems, and to defend one another from the dangers in the desert? We remember that the desert is the place where prophets sometimes went to meet God, with themselves and to better align themselves with God’s mission.

In Jesus’ time the desert was where the unclean people lived, the lepers, the poor, the marginalized of society and even the bandits. The desert is a place where life was very difficult, there is nothing romantic about the desert. It’s a harsh, threatening and fatal reality many times, but in the desert these rejected people found a way to live, to survive.

There Jesus faces Satan, the Devil, who confronts Jesus with three temptations: turning stone into bread to satisfy his hunger, receiving power over the kingdoms of the earth if he worships Satan, and tempting God to throw himself from above for the angels to catch him. Jesus denies all three with a phrase that affirms his position before God: the person lives not only on bread, but on every word that comes from the Mouth of God; you will worship only your God and not tempt your God.

When Satan confronted Jesus, he may well have been hungry and thirsty. But after 40 days in the wilderness, filled with the Spirit, he responds with integrity and freedom.
I wonder: was it the coexistence in the desert that taught these things, that gave Jesus courage to respond to temptations with resistance? Was it in this coexistence with the poor, the unclean, the marginalized in society and even the bandits that Jesus learned what he needed to learn to resist: sharing, serving, loving, worshiping God and helping in his preparation for the mission.

Once he returned from the desert and took up his mission, these are the three central points he lived and taught: instead of accumulating, sharing; instead of dominating, sticking with the poor and weak people serving, healing, forgiving and restoring the dignity and value of the poor people; and instead of using and manipulating God, opening one’s heart to God’s love and mercy and live this love and mercy with abundance and freedom in gratitude. Satan went unanswered and left to return at a timely moment.

At the beginning of this Lent 2022 in a world with wars, peoples migrating with much suffering, disasters that are said natural but are consequences of the destruction of nature, coronavirus that continues killing people with rich countries vaccinating their people with 4 doses and poor countries not even being able to give a single dose to their entire population, and original peoples being destroyed among other situations that show that we continue to live without sharing, without service, without love and mercy trusting in a Good God universally.

There are people who resist. Let’s see one example in Brazil: In the occupation called The Resistance of the Great Curve, 54 families live on their piece of land planting rice, corn, beans, cocoa, açaí and other vegetables. A man, a land-grabbing rancher, says he owns 6,000 hectares. The Resistance of the Great Curve is part this land. In addition to the work in their fields, the people have worked together to put electricity in all the houses, pressure the mayor to send the machines to make the road, build a shelter for a school and bring the people of the Department of Education to enroll students.

The farmer has been persecuting and terrorizing the people. He had a farmer’s workshop burned down, ordered tractors to tear down another farmer’s home, had his henchmen set fire to another farmer’s house, sent gunmen to threaten a woman with two small children when her husband wasn’t home, and is threatening the people with the police at his side, and he keeps saying that he has sold the land and the new owners will arrive, so they better get out.

Faced with these threats, these temptations to give up the settlement project, to believe in the threats of the farmer, accept a buck for their work and abandon the land, go live in the village or city, the people get stronger in their organization, firmer in their resistance, plant more and develop diversified family farming, defend the people most attacked by the land grabber and do not fall in face of these temptations.
The land-grabber stops for a while, and then comes again with another strategy. And the people keep on planting and working and not responding to the land-grabber.

We have 40 days (more or less) to pray; to look individually and collectively where we find our temptations to accumulate things, dominate others, and manipulate God; to identify where we are resisting by sharing, service, love, trust in God, and gratitude and to discover what else we can do as people and communities.

Filled with the Holy Spirit, Jesus returned from the Jordan and was led by the Spirit into the desert for forty days, to be tempted by the devil. He ate nothing during those days, and when they were over he was hungry. The devil said to him, “If you are the Son of God, command this stone to become bread.” Jesus answered him, “It is written, One does not live on bread alone.”

Then he took him up and showed him all the kingdoms of the world in a single instant. The devil said to him, “I shall give to you all this power and glory; for it has been handed over to me, and I may give it to whomever I wish. All this will be yours, if you worship me.” Jesus said to him in reply, “It is written: You shall worship the Lord, your God, and him alone shall you serve.”

Then he led him to Jerusalem, made him stand on the parapet of the temple, and said to him, “If you are the Son of God, throw yourself down from here, for it is written: He will command his angels concerning you, to guard you, and: With their hands they will support you, lest you dash your foot against a stone.” Jesus said to him in reply, “It also says, You shall not put the Lord, your God, to the test.”
When the devil had finished every temptation, he departed from him for a time.

Katy Webster (known as Kátia in Brazil) entered Notre Dame at Ilchester, Maryland in 1976. After initial formation in the Baltimore-Washington area, Katy was missioned to Brooklyn, New York. She taught sixth graders for nearly 5 years at St. Catherine of Genoa School. In February, 1984 Katy was sent to Brazil by the Sisters of Notre Dame de Namur, with the blessings of students and teachers of St. Catherine’s. Kátia lived in Maranhão for 9 years. Then in 1993, she moved to Pará where she has lived at Centro Nazaré on the Transamazon Highway, Altamira, Anapu and Itaituba. Kátia is currently back in Anapu. Kátia has lived with and among the people who struggle to live community while facing the greed of ranchers, loggers and lately the mining companies, and always learning far more than teaching. It is a blessed journey of faith and trust in the good God. 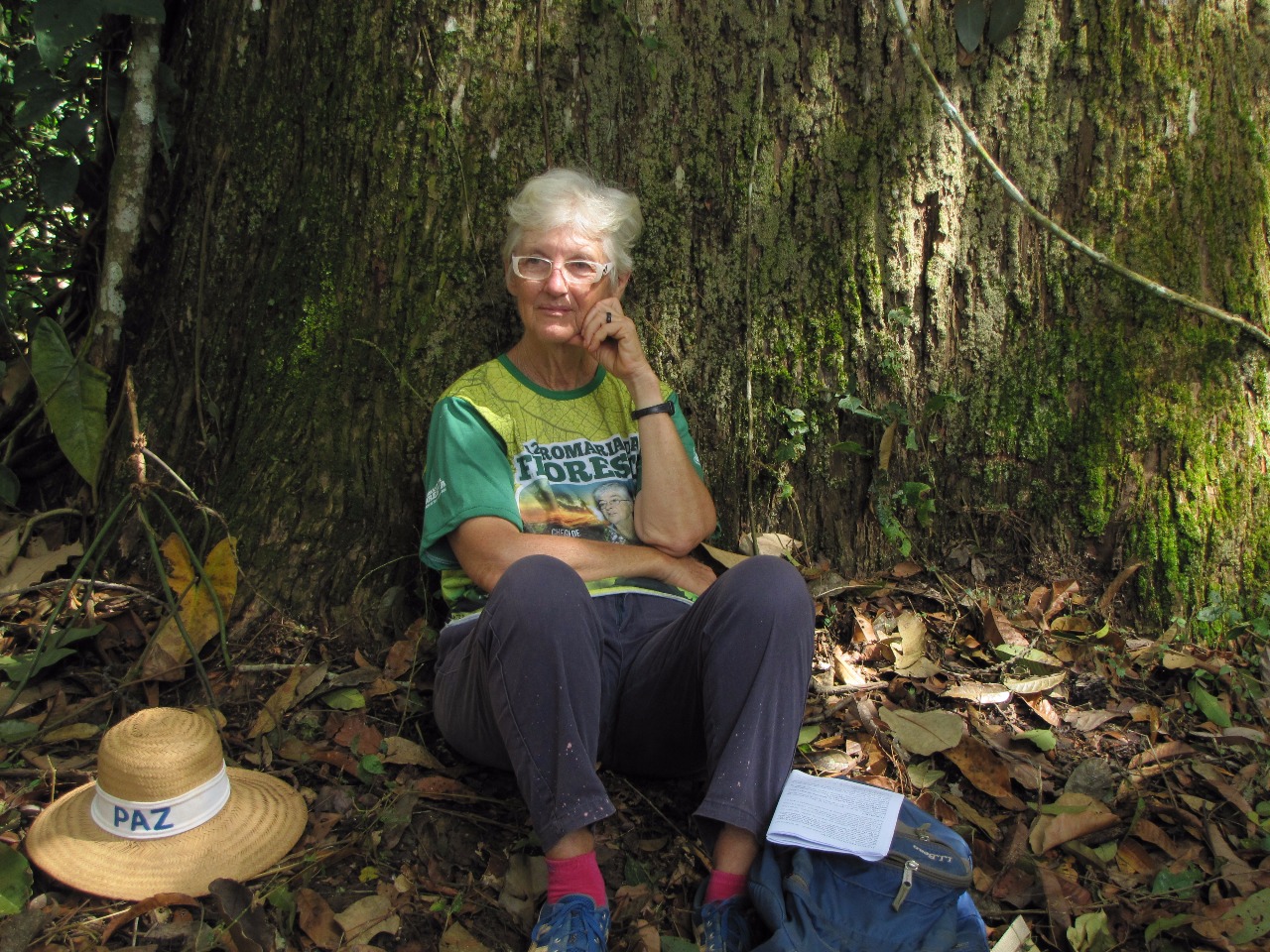