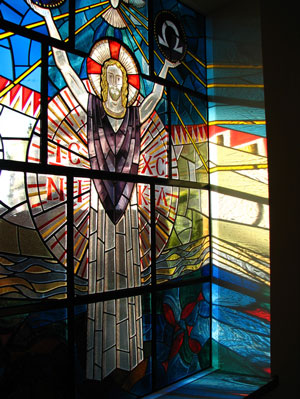 And just as Moses lifted up the serpent in the wilderness, so must the Son of Man be lifted up,
that whoever believes in him may have eternal life.

“For God so loved the world that he gave his only Son, so that everyone who believes in him may not perish but may have eternal life.

“Indeed, God did not send the Son into the world to condemn the world, but in order that the world might be saved through him.

Those who believe in him are not condemned; but those who do not believe are condemned already, because they have not believed in the name of the only Son of God.

And this is the judgment, that the light has come into the world, and people loved darkness rather than light because their deeds were evil.

O give thanks to the LORD, for he is good; for his steadfast love endures forever.

Some were sick through their sinful ways, and because of their iniquities endured affliction; they loathed any kind of food, and they drew near to the gates of death.Then they cried to the LORD in their trouble, and he saved them from their distress; he sent out his word and healed them, and delivered them from destruction.

Let them thank the LORD for his steadfast love, for his wonderful works to humankind. And let them offer thanksgiving sacrifices, and tell of his deeds with songs of joy.

The song behind the Jerusalema Dance Challenge:
Join the Dance to Jerusalema!!!
https://www.youtube.com/watch?v=gYhm6PCUtSg

“Freely you received, so freely give”