In this liturgical season of the Resurrection, why do we celebrate Good Shepherd Sunday? Jesus the Good Shepherd has walked among us and completed His ministry, before he died and rose to save us.

In fact, the post resurrection time was just when this Gospel message was most needed. It was a time of confusion, great uncertainty, and a number of Jesus disciples and followers refused to believe and had rejected his teaching. Others would have been feeling very insecure after Jesus had left them, even though he had promised to be with them to the end of time. It was a time of confusion, and lack of direction, there were divisions among the people; their faith was being tested.

Today’s short Gospel message which follows the comforting, encouraging message of the Good Shepherd, helps us to understand the background tensions of the time and the ever-greater need for this message; the need for spiritual guidance, encouragement and strength which is what Jesus the Good Shepherd offers.
“The sheep that belong to me listen to my voice; I know them, and they follow me.” John10:27
The same message is expressed in the Second Reading of today’s Mass when we hear that those who suffer will never grow hungry again, because the shepherd will care for them. “The lamb at the centre of the throne will be their shepherd; he will lead them to springs of living water.” Apoc7:17
We live in a time of great uncertainty of suffering, oppression, and discrimination across our world There are days in each of our lives when we panic and find that we are sinking in our own problems. Maybe we feel we can’t cope but let us be assured that God is very close and will be our comfort and strength if we only trust in his abundant love.

“I give them eternal life; they will never be lost, and no one will ever steal them from my hand.” John10:29
Let us pray for all in our world who are suffering, and in need of courage, strength and trust in God’s goodness, to carry their burdens.
We can be confident of God’s abundant love, protection, guidance every day, if we trust and respond to his invitation, as the Psalmist reminds us:

The sheep that belong to me listen to my voice; I know them, and they follow me. I give them eternal life; they will never be lost, and no one will ever steal them from me. The Father, who gave them to me, is greater than anyone, and no one can steal from the Father. The Father and I are one.

Jo Threlfall entered Notre Dame in 1963 having been educated in different parts of the country by five different religious congregations. The attraction of St. Julie’s charism of simplicity, love, and concern for the education of women and girls was always very strong along with her sense of justice. She spent ten years teaching in primary and middle schools in England before going to Nigeria where she spent time teaching in primary and secondary schools. She later worked with women’s development programmes. This was really challenging but enjoyable and rewarding work. There were only 12 sisters from the British Province when she arrived in 1977 and by the time, she left in 1997 there were over 50 sisters, 6 of whom were expatriates. In 2022, there are over 100 Nigerian Sisters with 2 from the British Province She then spent two years in Zimbabwe in the late 1990’s coordinating women’s development programmes reaching women in the rural areas across the country. Here she was very much aware of the contrast between the wealth in the towns and the dire poverty of the women and children in the rural areas. Often the men went to the towns for work only returning home for short periods. After returning to the UK in 1999, she helped in the Africa Administration section of Cafod and taught English at the Refugee Council. After some pastoral work in Brixton Prison, she continued English teaching at the Cardinal Hume Centre in London and spent a year in the Office of Missio. She has added to her ministry part time work with the ecumenical chaplaincy team at Gatwick Airport. She is a member of the Diocesan Justice and Peace Commission focusing on the Laudato Si Movement, immigrants, and modern day slavery. 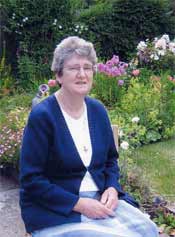