We are celebrating the first day of the Pascal Triduum. It is the day of the victorious cross upon which Jesus left us the best of himself: Mary as mother, pardon including to his executioners, and total confidence in God the Father.

We have heard the reading of the Passion according to the witness of St. John, present on Calvary with Mary, the Mother of the Lord, and the holy women. It is an account rich in symbolism, and each small detail has meaning. But the silence and austerity of the church today helps us, too, to live in a climate of prayer, attentive to the gift which we celebrate.

At a time of absolution at a funeral the priest invites to keep a moment of silence and to think about the happy moments spent with the deceased person. It is truly a time of communion. Today we suffer with Christ, stop, leave everything which we are in the process of doing and look around us, in our own biological and religious families, in our ministries, in our respective communities, in our world marked by the effects of Covid-19, in our hearts, etc. What is the meaning of the passion for me? For you? If the passion does not affect us, we are no longer Christians.

To lose someone close to us is a time of darkness, abandonment and despair. We feel alone and plunged into solitude. Everything is centered around the loss of the one whom we have loved. Jesus in his suffering is attentive to the suffering of others. At the time of his arrest, he would say: “I told you I am he,” Jesus replied. “So, if you are looking for me, let these men go.” (Jn 18: 8) And at the brutality of Peter who cut off the ear of the servant of the high priest, he would say, “Put your sword away! Am I not to drink the cup the Father has given me?” (Jn 18: 11)  Jesus was a human being until death, death on a cross. But this was a death accepted for the redemption of everyone, a redemptive death, a death which gives us life.

When I was small, I remember a significant tradition which took place at the time of the burial of someone who had lived well.There was a small basket with seeds taken from his harvest and placed at the feet of the coffin. At the moment when the body was lifted up, the person who had the name of the deceased person circled the coffin three times with the little basket containing the seeds. This was a sign of blessing. These seeds were shared among those who were close to the deceased person. These people planted them, and often the harvest was generous. These were the fruits of remembrance.

Jesus on the cross gave himself in sacrifice for us. We are above all grateful and filled with admiration. We know the price of love: “There is no greater love than to give one’s life for one’s friends” (Jn 15:13). Christian prayer does not consist only of asking, but, above all, of admiring with gratitude. Jesus, for us, is a model whom we should imitate. We should be people who love, giving ourselves even in small things.

This is in contrast to the atmosphere of indifference of our society. This is why our witness should be more courageous than ever, for the gift is for all. In the words of Méliton de Sardes, “He has enabled us to pass from slavery to freedom, darkness to light, death to life. This is the Easter of our salvation.”

For God sent his Son into the world not to condemn the world, but so that through him the world might be saved. No one who believes in him will be condemned; but whoever refuses to believe is condemned already, because he has refused to believe in the name of God’s only Son. On these grounds is sentence pronounced: that though the light has come into the world men have shown they prefer darkness to the light because their deeds were evil. And indeed, everybody who does wrong hates the light and avoids it, for fear his actions should be exposed; but the man who lives by the truth comes out into the light, so that it may be plainly seen that what he does is done in God.

Honorine Yamba was born on December 13, 1950 at Kimpemba in the Democratic Republic of Congo. She entered the Sisters of Notre Dame de Namur in 1969. She began her novitiate in 1970 and made first vows in 1972. She pronounced her final vows in 1981 at Lemfu where she was on mission. Sr. Honorine has performed many ministries in the province and the Congregation. She was prefect of studies, professor and superior in communities and Provincial Counselor for many years. She also served as assistant director of Novices for two years at Kimwenza. Sr Honorine was provincial from 1991 à 1996 and was elected as a member of the Leadership Team of the Congregation at the General Chapter in 1996. After this service she spent a sabbatical year at Lyon in France at the Jesuit Center “FAS “ -Formation, Accompaniment and Spiritual Discernment according to the exercises of St. Ignatius. Following her sabbatical year, she served as novice director in the province of Nigeria for two years. She returned to Congo in 2005 to work in the Diocese of Kisantu office of Caritas. She also provided service at the Heritage Center at Namur, Belgium for six years. Having returned to Congo in 2018 she currently works in the province archives and serves as a professor in the two formation houses (postulate and novitiate), gives sessions and provides spiritual direction as occasions arise. 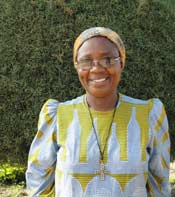