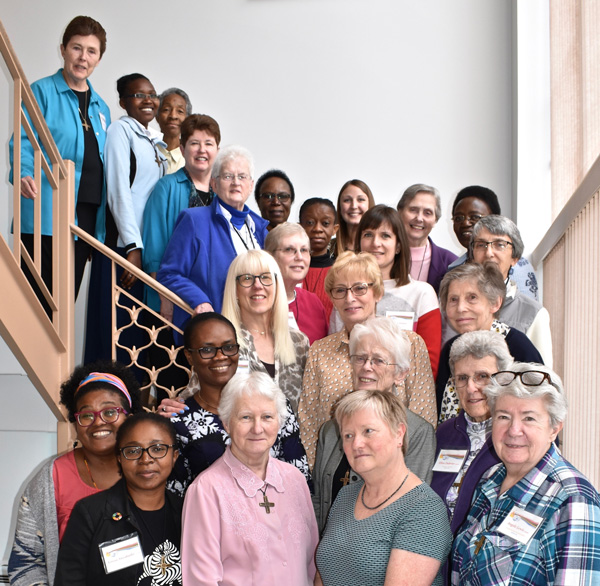 On Fire with Mission, Sisters and Staff strengthenednetworking in communications internationally inMarch 2020. They continue to meet on Zoom about
every 8 weeks.

Communication has played an important role in the life of Sisters of Notre Dame de Namur (SNDdeN). From the earliest days, good communication has informed, inspired and united the Sisters. St. Julie Billiart valued constant communication and demonstrated this commitment through her letters to Françoise Blin de Bourdon and all the Sisters, her in-person visits to various communities of Sisters in Belgium and France. In her  firm belief for the Mission of the Congregation, Julie communicated despite the difficulties of travel and the dangers of the times. As we reflect upon the unfolding history of the Congregation, we understand that the commitment to Mission, the building of community and communicating the goodness of God has been a consistent thread to the present in the life of Notre Dame de Namur.

SNDdeN have served in the United States for three centuries, using communications to build relationships with one another and with those they serve, holding true to the mission while adapting to the needs of the times. In the 1800’s, oceans separated the Sisters living in America from those on other continents. Since the mode of transportation made it difficult to travel within the country, Sisters largely remained within their local missions. Letter writing was the major form of communication among Sisters, convents and families both at home and abroad. There was no specific mode of external communication used during these times; Sisters counted on their presence and interactions with students and families to speak for them wherever they served.

In years when face to face gatherings became more common, Sisters found new ways to communicate and form strong bonds with one another. In the 1900’s, they expanded their external communication networks. They became members and leaders in regional and national organizations such as the Leadership Conference of Women Religious and the National Black Sisters Conference.

In the 21st Century, Sisters connected among one another in an internal intranet system, First Class, used for social interaction and international and province business. Later, the ubiquitous use of cell phones as the device used for Internet searches, texting as a major mode of communication and the explosion of social media became the norm. In this context, the Sisters build today Websites and social media platforms such as Facebook, Twitter and Instagram compatible with cell phones. These early adapters of virtual meetings are a way to connect through technology with one another and with external audiences, essential for communicating with one another and with the ministries.

Internationally, there is a common and deeply held bond between and among SNDdeN, which includes different cultures and seven languages.There are multiple examples of the steady flow of communications with one another and with people with whom they work and serve. In person and virtual gatherings during the past two years are examples of Sisters using communications to build community and to  find ways to live the Mission in an effective and meaningful way – sometimes with Skype, Zoom or WhatsApp.

The General Chapter (GC), in Religious Congregations, is the highest-ranking body for decision-making and usually meets every six years. Sisters of Notre Dame de Namur had scheduled their 18th GC to be in Nairobi, Kenya in July 2020. COVID-19 invaded our lives as it did globally and the pandemic continued over these two plus years. Restrictions for entering other countries closed any hope for our Delegates to meet face-to-face in a Chapter. Yet, even a pandemic was not able to deter the SNDdeN from their international Mission. In 2021, the Chapter Delegates met virtually across  five continents in multiple time zones during three-day sessions, lasting four hours each on ZOOM, during September through early December. Delegates agreed on specific directions for the Congregation in a movement forward with new initiatives; they elected a new Congregational Leadership Team for the next six years. Communications continue to unite the Sisters internationally. 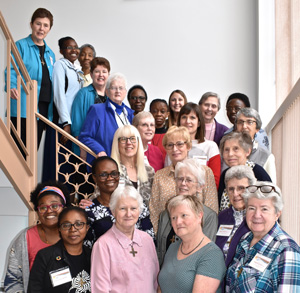