This year, the celebration of our Congregational ‘birthday’ has a different feel to it as we stand in between the service periods of the outgoing and incoming Congregational leadership teams. Like Simeon and Anna, Teresita and her team have been waiting for this day, and Simeon’s Nunc Dimittis can be prayed by them in an especially meaningful way. Now we, wherever in the Notre Dame world we are, can let God’s faithful servants go in peace as they hand on the light of leadership to Mary and her team.

Julie, Françoise and Catherine made the (first) Consecration of themselves on this day in 1804 making it the day in the liturgical calendar that we consider to be our foundation day. Sr Ellen Gielty’s 1994 translation of this consecration puts these words on the lips of the first three Sisters of Notre Dame:

‘…And to put that final seal on my consecration
I place it in the Immaculate heart of his holy Mother….’

As we reflect on the symbolism of this 2nd February liturgical feast day, there is so much to be drawn to:
the ‘40-day-old-parents’ of Jesus, in obedience to the law requiring them to be purified, taking their baby boy up to the temple, and with him, two turtle doves or pigeons to be offered in sacrifice; the Spirit-led old man, Simeon, faithful to what had been revealed to him; the prophetess and widow, Anna, ‘well on in years’; the temple that will play a significant part in Jesus’ own ministry leading up to his death and resurrection…

As a Congregation of women disciples of Jesus, we stand in the temple of our world, conscious that for some of us, like Simeon and Anna time is running out. Others of us expect to have more of this gift of time in which ‘to devote ourselves to the service of God’s people.’ Simeon faced Mary with what lay before her as the mother of the One who would be rejected by many because of his fidelity to the God he called Father, Abba.

Can Simeon’s words be applied to each of us as we take up the calls of our 18th General Chapter, reaching out to the poor ones of our earth, in the footsteps of Julie and Françoise? Whatever our service is, large or small, may it be part of the ‘refiner’s fire and fuller’s alkali’ (Malachi 1:3), and of the ‘light of revelation’ to our world. (Lk Ch 2).

When the days were completed for their purification according to the law of Moses, they took him up to Jerusalem to present him to the Lord, just as it is written in the law of the Lord,
“Every male that opens the womb shall be consecrated to the Lord, to offer the sacrifice of a pair of turtledoves or two young pigeons, in accordance with the dictate in the law of the Lord.”
Now there was a man in Jerusalem whose name was Simeon. This man was righteous and devout, awaiting the consolation of Israel, and the Holy Spirit was upon him. It had been revealed to him by the Holy Spirit that he should not see death before he had seen the Christ of the Lord. He came in the Spirit into the temple; and when the parents brought in the child Jesus to perform the custom of the law in regard to him, He took him into his arms and blessed God, saying:
“Now, Master, you may let your servant go in peace, according to your word, for my eyes have seen your salvation, which you prepared in sight of all the peoples, a light for revelation to the Gentiles, and glory for your people Israel.”
The child’s father and mother were amazed at what was said about him; and Simeon blessed them and said to Mary his mother, “Behold, this child is destined for the fall and rise of many in Israel, and to be a sign that will be contradicted –and you yourself a sword will pierce– so that the thoughts of many hearts may be revealed.”
There was also a prophetess, Anna, the daughter of Phanuel, of the tribe of Asher. She was advanced in years, having lived seven years with her husband after her marriage, and then as a widow until she was eighty-four. She never left the temple, but worshiped night and day with fasting and prayer. And coming forward at that very time, she gave thanks to God and spoke about the child to all who were awaiting the redemption of Jerusalem.
When they had fulfilled all the prescriptions of the law of the Lord, they returned to Galilee, to their own town of Nazareth. The child grew and became strong, filled with wisdom; and the favor of God was upon him.

Brigid Rose Tiernan has been in Notre Dame since 1963. She was born in Bulawayo Zimbabwe, grew up in Zambia, but attended the Notre Dame Convent in Kroonstad, South Africa, where she discovered her call to be a Sister of Notre Dame de Namur. She obtained a BA degree before joining the SNDs, and as an SND had the opportunity to study further in the field of Education. She has been a High School Teacher, a trainer for Justice and Peace – a life-long passion – and, latterly, has added Organisational Development and Facilitation skills to her repertoire. She lives in Johannesburg and continues her leadership in her ministry of education. She works in the ZimSA archives…and loves the opportunity it gives her to get in touch with the stories that have made the Sisters of Notre Dame who they are today. 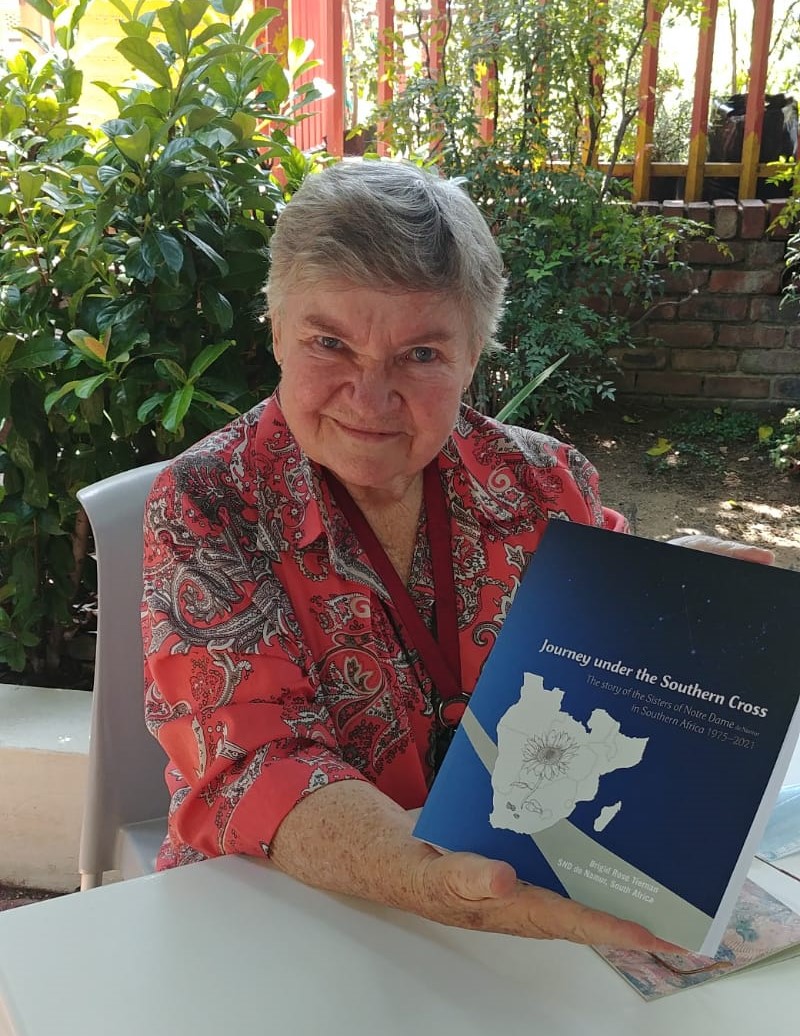