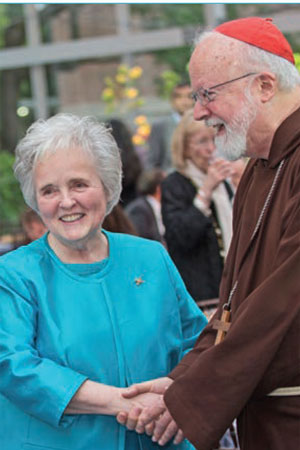 Sr. Janet Eisner, SNDdeN, welcomed Cardinal Seán P. O’Malley, OFM Cap., Archbishop of Boston, at her 40th Anniversary Gala in May. Since her inauguration as President in 1979, Sister Janet has kept the College’s mission thriving in an ever-changing world.

On May 30, 2019, over 400 people gathered for a historic gala honoring Sister Janet Eisner SNDdeN, on her 40th anniversary as President of Emmanuel College. Among them were graduates from across eight decades, along with Boston Cardinal Archbishop Seán P. O’Malley, OFM Cap., Boston Mayor Martin J. Walsh, and leaders in higher education, biomedicine, finance, the arts and a host of other fields. They came to pay tribute to a respected peer, collaborative partner and beloved friend—a woman religious who for 40 years has led Emmanuel with vitality, creativity and an unwavering dedication to the College’s Catholic educational mission.

As they walked toward a magnificent glass tent raised for the occasion on the College’s central quadrangle, guests could observe symbols of Sister Janet’s transformational presidency: a modern student center, a state-of-the-art science center, and a new 18-story apartment-style residence hall. The buildings told a broader story of institutional momentum, one highlighted by a threefold increase in enrollment, innovative academic and student life programs, grants from the National Science Foundation and other prestigious funders, and new endowed professorships and lecture series, including one named in honor of Catholic Worker Movement co-founder Dorothy Day.

More than 800 graduates attended events throughout Centennial Alumni Weekend, May 31 – June 2, 2019. A number of celebrations, including Sr. Janet’s 40th Anniversary Gala, were held under the lights in a glass house on Emmanuel’s Quad.

Advancing Mission in a Changing World

These and many other advances have taken place amid seismic changes in higher education, reflecting Sister Janet’s attentiveness to the “signs of the times” and her commitment to adapting to the evolving needs of each generation of students. As she told attendees at the Sisters of Notre Dame de Namur’s Networking for Mission III Conference, held at Emmanuel in 2018: “We constantly look to the future and ask: What brings us joy? What are we good at? And what does the world need us to be?”

The past four decades provide numerous examples of Sister Janet’s entrepreneurial spirit. In 2000, after a careful analysis of data and trends, the College made the decision to admit young men to its previously all-women’s four-year undergraduate program. That same year, the College entered into a 75-year ground-lease agreement with Merck & Co., enabling the company to begin construction of an 11-story, 300,000 square-foot research facility on a back parcel of the campus in exchange for a substantial one-time upfront payment.

Committed to the Vision of St. Julie Billiart

Amid changes, Sister Janet has remained steadfastly committed to the vision of St. Julie Billiart and to the values of the Sisters of Notre Dame who opened Emmanuel in 1919. In her messages to the College community, she has addressed topics including immigration, the environment, gun violence, and racial and religious intolerance. In addition, she has delivered keynote lectures on Emmanuel’s history during the annual Founders’ Week, which celebrates the educational legacy of the Sisters of Notre Dame de Namur.

Under Sister Janet’s leadership, faculty continue to challenge students to engage in critical social analysis of the root causes of the problems of their times and to consider effective responses and actions. By reflecting on these discussions, students further develop a commitment to social justice, and often express it through volunteer service. In fact, each year Emmanuel students contribute more than 50,000 hours of service to people in need throughout Boston and beyond.

“A Source of Great Joy”

During the 40th anniversary gala, Sister Janet’s longtime colleague and friend, Emmanuel Vice President of Finance, Sister Anne Mary Donovan, SNDdeN, announced a recent decision by the Board of Trustees to name the College’s iconic Administration Building in Sister Janet’s honor. For a woman who had spent decades of her life living, teaching and serving as President within the walls of the Collegiate Gothic building, it was a profoundly moving moment.

Speaking to the guests that evening, Sister Janet reflected, “Our founders gave us the name Emmanuel, which means ‘God with us.’ And I believe that to the core of my being. It is very real to us as we experience God’s amazing action in our work, in our lives and in the journeys of our students and graduates. For me this is a source of great joy.” 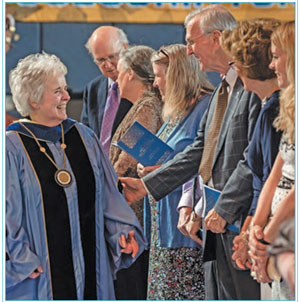 On the afternoon of June 1, 2019, during the Centennial Alumni Weekend, nearly seven hundred came together for a joyful Liturgy to honor Sister Janet on her 40th anniversary. Rev. J. Bryan Hehir celebrated the Liturgy, which featured a gathering hymn called “Ever-Beginning,” with lyrics written by Sister Evelyn Ronan, SNDdeN ’63, and a special original composition by Sister Janet’s nephew, Joseph Taff, with the title, most expressive for Emmanuel’s Mission: “Ah qu’il est bon!” 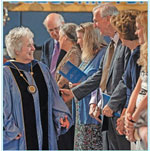