There are many ways is which we may be called. People may call us directly or by the phone. They may call us by silent signs or send somebody to call us to them. Some of the earliest converts to Christianity came from the circle of John the Baptist’s disciples. Today’s readings tell us of three different calls.

2020 is a year like no other that we have experienced. We are still very much at the beginning of 2021 and wonder what the year ahead holds for us, our families, communities, and the whole world. What matters above all is that we should listen to God’s voice. It is there, but it is always a gentle voice and therefore we must pay careful attention to it. In the readings today we have different ways in which God calls people.

The gospel reading describes the opening scene of John’s gospel after the solemn and dramatic Prologue. It contains the very first words spoken by Jesus in this gospel Before Jesus speaks to his first disciples, they must be listening, but it is not to Jesus that they must first listen, but to John the Baptist whose followers they were. As Jesus passes by, John continuing his function as witness (1:6,) points out Jesus. The Baptist had come to direct people not to himself but to Jesus, as we are all called to do. John describes Jesus as the ‘Lamb of God” which is a rather strange phrase until we realize that the evangelist wants us to think of the Passover lamb offered in sacrifice (Jn 19:14). This title “Lamb of God” made an such an impression on the early church that it is repeated four times at every Eucharistic celebration, “Behold the Lamb of God’.

As a result of the Baptist’s witness, two of his disciples followed Jesus. Seeing them, Jesus asked the most fundamental question in life which is also addressed to every reader of the gospel, ” What are you looking for?” We might contrast that with the question Jesus put to the weeping Mary Magdalene. “Whom are you looking for?” (20:15). [Questions to reflect on today.] The disciples replied, perhaps surprised by the question, ”Where do you stay?” Here the evangelist is playing with words. The word translated ‘stay’ can also be interpreted as ‘abide’ or ‘spend the day,’ is a single word in Greek and runs through the whole gospel. The disciples had asked Jesus where he lived in the ordinary sense of the word, John knows that “God lives in Jesus (1:10) and that the two of them live in the believer (14: 23) that the perfection of the believer is to live, abide, dwell in the Father and the Son (1 John 2:24

Jesus replied, “Come and you will see ,”He was inviting them to discover for themselves what He had to offer. God always takes the initiative. Andrew was one of the disciples. We do not have a great deal of information about Andrew, but he has two outstanding characteristics. He was always prepared to take the second place and, although he was the one who told his brother Peter “We have found the Messiah” and brought him to Jesus, he is again and again referred to as the brother of Simon Peter. Andrew is also the one who brings the boy with five loaves and two small fish to Jesus who then feeds the multitude (6:8,9). Later, Andrew brings the enquiring Greeks into the presence of Jesus. A disciple cannot keep the news of Jesus to himself, having found the friendship of Jesus, Andrew wanted to share it with others.

When Jesus saw Peter, he looked at him and saw not only a Galilean fisherman, but one who despite all his weaknesses, or perhaps because of them, would become the rock on which the church would be built (16:18). Jesus said, “You are Simon son of John; you will be called Cephas” (which is translated Peter) ’ (1:42). Peter means ‘rock’. In the ancient world nearly everyone had two names. Greek was the universal language, so the people had a Greek name for business and then a name in their own native language by which they were known to the family and friends. This is the same in Africa today where the family name has great significance.

Jesus sees us not only as we are but with the help of His grace what we can become. A person saw Michelangelo chipping at a large shapeless piece of rock. He asked the sculptor what he was doing and received the answer, ” I am releasing the angel imprisoned in the marble.”

As John stood with two of his disciples, Jesus passed, and John stared hard at him and said, “Look, there is the lamb of God.” Hearing this, the two disciples followed Jesus, Jesus turned round, saw them following and said, “What do you want?” They answered, “Rabbi,” – which means Teacher – “where do you live?” “Come and see” he replied; so they went and saw where he lived, and stayed with him the rest of that day. It was about the tenth hour.

One of these two who became followers of Jesus after hearing what John had said was Andrew, the brother of Simon Peter. Early next morning, Andrew met his brother and said to him, “We have found the Messiah” – which means the Christ – and he took Simon to Jesus. Jesus looked hard at him and said, “You are Simon son of John; you are to be called Cephas” – meaning Rock.

• Sr. Marie Andre Mitchell is a South African by birth. After teaching for a year she entered the Sisters of Notre Dame de Namur in Constantia, Cape Town on 12 January 1957, but did her Novitiate in Ashdown Park, England. Later. she studied by correspondence for a B.A. (University of South Africa). She obtained B.The.and Master of Religious Studies (cum laude) at the Missionary Institute in London . The degrees are accredited by the Catholic University of Louvain. Belgium. Her ministry at present is a member of the International team of the Bat Kol Institute, Jerusalem. The motto of the Institute is ~Christians studying the Bible within its Jewish milieu using Jewish sources.” She serves on the SACBSC’s Dept of Interreligious Dialogue and Ecumenism with’ Relations with the Jews as her portfolio, She has several Scripture groups which are suspended at present because of Covid 19. She acts as Communicator for the South African Community Organized for Mission. 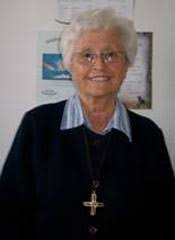