In today’s Second Reading, we are assured that “the Lord is not being slow. The Lord is being patient…wanting (us) to change our ways,” so that “righteousness will be at home” among us. But God DOES seem, not only to be “slow,” but very far away, at least to me! At this point, almost at the end of the year of 2020, our country and indeed our world, feel like a true “wilderness!” … like a real desert! And the first thing that John the Baptist calls us to is repentance! Repentance may not be something we usually associate with Advent. For this Advent, however, it may be just “what the world needs now!” … not just for “this one or that one,” but for each one of us!

Bishop Kenneth Untener once suggested that “to repent means to think some long thoughts, to take a good look at the whole picture…” at the inequities among us, the double standards, the erosion of civility, the diminishment of truth-telling, the intolerance, and greed, and abuse of power, etc., etc.. Where am I in need of repentance with these realities? …in my own attitudes and words and actions? As a poet once said, “sometimes I shut the door on all the world and go to that most secret place where there in only God and me. Together we go over subtle acts, mistakes and small hypocrisies of mine!” To repent, Bishop Ken continued, “is to see things differently and as a result, to live differently.”

The Gospel call to us this Second Sunday of Advent, is not to clear the path ahead for ourselves to travel on then. John Shea would suggest that it’s about clearing the obstacles that prevent the Lord from reaching us, God’s People! This path to us is so badly twisted at this point in human history! There seem to be so many things between us and God these days. We all have contributed to that, with our own blindness or indifference, our own violence or racism, etc. These obstacles, interior as well as exterior, are in the way of the One who desires to come among us and “set our stones in order” and help us recognize that we ALL are ONE … equal in dignity, value and worth in God’s eyes… that we ALL belong to each other and to the same human family and live on and share the same earth.

Isaiah tells us how to “prepare the way for the Lord” … how to make straight God’s pathway. The prophet tells us that it will be through offering comfort to one another at this time of incalculable loss, offering tenderness and mercy, working with all people of good will, remembering humility and most especially, with the power of the Spirit as our Guide, remembering what we are doing: preparing the way, and who we are doing it for: the LORD!

The beginning of the good news about Jesus the Messiah, the Son of God, as it is written in Isaiah the prophet:
“I will send my messenger ahead of you,
who will prepare your way”
“a voice of one calling in the wilderness,
‘Prepare the way for the Lord,
make straight paths for him.’”
And so John the Baptist appeared in the wilderness, preaching a baptism of repentance for the forgiveness of sins. The whole Judean countryside and all the people of Jerusalem went out to him. Confessing their sins, they were baptized by him in the Jordan River. John wore clothing made of camel’s hair, with a leather belt around his waist, and he ate locusts and wild honey. And this was his message: “After me comes the one more powerful than I, the straps of whose sandals I am not worthy to stoop down and untie. I baptize you with water, but he will baptize you with the Holy Spirit.”

Sister Ginny Scally was educated by the Sisters of Notre Dame in her home parish of St. Gregory’s in Dorchester, Massachusetts. She joined them after graduating from high school. Like most SND’s, her professional life began as a teacher in an elementary setting. Because of her involvement in the parish religious education programs in those early years, she also was influenced by the spiritual needs and hungers of the laity she met. As a result of those encounters, she chose to pursue graduate studies in Theology with an emphasis on Scripture and Spirituality. She was a Pastoral Administrator in priestless parishes (Read “pastoring person!) in the Diocese of Saginaw, Michigan for over 20 years, completed a hospital chaplain’s residency and served as the Coordinator of Catholic Pastoral Services at the North Shore Medical Center in Salem, Massachusetts. Ginny was recently appointed one of the three Support Coordinators serving in the Northeast Region of the East West. 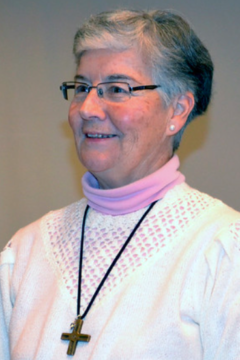