A frequent question asked by the retreat accompanier of a retreatant is, “What has stayed with you from the scripture passage which you have been contemplating?” From this passage of the Gospel of Matthew what has stayed with me is the question Jesus asked after his three examples of the kingdom of heaven: The hidden treasure, the pearl of great value, the dragnet “Have you understood all this?” “They said, ‘Yes.’” “THEY” are the crowds to whom Jesus was speaking.

And after the affirmative of the crowd Jesus adds the example of the Kingdom of heaven being likened to a scribe who becomes a householder bringing out from his storeroom things old and new.

So, I ask myself “Have understood all this?” My answer is “no”. During my life I have heard many explanations and theories about the meaning of the treasure and the pearl and the drag net and the householder as I am sure so has everyone else. During these weeks of pandemic and lockdown with the constant threat of sickness and even of death hanging over us balanced with the ecological benefits of our planet I am beginning to understand. Like the man who sold everything he had to buy the field and was happy. Jesus tells us that the pure in heart are happy. The pure in heart have the trust of a child. They live in the present moment. They are not anxious. They trust that their loving God knows all their needs. They are not afraid to set their hearts on God’s Kingdom first. During these difficult times of pandemic perhaps I am beginning to learn what I truly value. To sort my “storeroom” out and to realize where my true happiness lies.

“Blessed are the pure in heart they shall see God.”

“The kingdom of heaven is like treasure hidden in a field. When a man found it, he hid it again, and then in his joy went and sold all he had and bought that field. “Again, the kingdom of heaven is like a merchant looking for fine pearls. When he found one of great value, he went away and sold everything he had and bought it. “Once again, the kingdom of heaven is like a net that was let down into the lake and caught all kinds of fish. When it was full, the fishermen pulled it up on the shore. Then they sat down and collected the good fish in baskets, but threw the bad away. This is how it will be at the end of the age. The angels will come and separate the wicked from the righteous and throw them into the blazing furnace, where there will be weeping and gnashing of teeth. “Have you understood all these things?” Jesus asked. “Yes,” they replied. He said to them, “Therefore every teacher of the law who has become a disciple in the kingdom of heaven is like the owner of a house who brings out of his storeroom new treasures as well as old.”

Joan Mary Brown was born in Leeds, a city in the North East of England. Her father was an English Protestant who later became a Catholic and her mother a Lithuanian Catholic. She has one brother but had a large loving united family of aunts, uncles and cousins, even if they didn’t all speak English. She attended the Notre Dame Collegiate School in Leeds and entered the Sisters of Notre Dame at Ashdown Park in 1952. Joan Mary is an artist and writer. She started her Notre Dame life as a teacher, training at Mount Pleasant College of Education in Liverpool and taught in Notre Dame preparatory schools until 1963 when she went to Nigeria with Sisters Mary Dolores Greely and Ellen Gielty to found the Nigerian mission. On returning to England she retrained in play therapy and worked in the Notre Dame Child Guidance Clinic in London for several years before returning to classroom teaching. Again she retrained in Ignation Spiritual direction and was involved in Retreat Direction and creative spirituality. In the late seventies she went to Crawley a small town in the South of England, where she continued the retreat work as well as involvement in parish ministry. Joan Mary had a special interest in catechesis and Liturgy and wrote and published books on Liturgy of the Word for Children and sacramental preparation programmes and gave many training days… During her time in Crawley Joan Mary also worked as a Diocesan Religious Education advisor to the schools and served on the Diocesan Liturgy Commission. Retiring from the schools she opened a small house of prayer in Crawley. In 2016 Joan Mary left Crawley and now lives in a community of 25 Sisters in Birkdale in the North West of England where she continues her creative spirituality, her art and her writing. She is currently working on a life of St Julie for children with a very unusual approach. Also materials on Dame Julian of Norwich a 14th Century English Mystic and help for Catechists on Praying with Children. 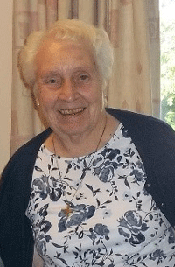