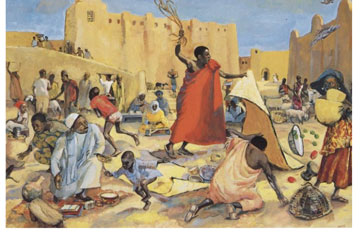 The Passover of the Jews was near, and Jesus went up to Jerusalem.

In the temple he found people selling cattle, sheep, and doves, and the money changers seated at their tables.

Making a whip of cords, he drove all of them out of the temple, both the sheep and the cattle. He also poured out the coins of the money changers and overturned their tables.

He told those who were selling the doves, “Take these things out of here! Stop making my Father’s house a marketplace!”

But he was speaking of the temple of his body. After he was raised from the dead, his disciples remembered that he had said this; and they believed the scripture and the word that Jesus had spoken.

Psalm 19
The heavens are telling the glory of God; and the firmament proclaims his handiwork. Day to day pours forth speech, and night to night declares knowledge.

There is no speech, nor are there words; their voice is not heard; yet their voice goes out through all the earth, and their words to the end of the world. In the heavens he has set a tent for the sun, which comes out like a bridegroom from his wedding canopy, and like a strong man runs its course with joy.

More to be desired are they than gold, even much fine gold; sweeter also than honey, and drippings of the honeycomb. Moreover by them is your servant warned; in keeping them there is great reward.

But who can detect their errors? Clear me from hidden faults. Keep back your servant also from the insolent; do not let them have dominion over me. Then I shall be blameless, and innocent of great transgression.

JOIN THE DANCE TO JERUSALEMA!
https://www.youtube.com/watch?v=unVoLZClhqw

JESUS IS OUR SACRIFICE –