For the Disciples the time after the Resurrection must have been like no other. Traumatised by recent events they were living in a world of disbelief, emptiness and the unknown.

Having decided to anchor themselves in some sort of normality, they go fishing, but that doesn’t work out either. As an unknown stranger on the shore gives advice they cast their nets again, with immediate success. Was it something in the ‘voice’ the ‘manner’ that touched the soul of ‘the disciple whom Jesus loved?’ Recognition dawns, and the joyful cry, ‘It is the Lord.’

‘This was the third time that Jesus showed himself to the disciples.’ Doesn’t it seem strange that the man they had spent so much time with, over recent years, the man with whom they had developed such close relationships, this same man is now unfamiliar to them? ‘This was not the old ways come again.’ This was not the Jesus they had known and loved. This was the Risen Lord. The past is to be left behind, the new welcomed. As they opened themselves to this new reality what was the talk among themselves, what was the mood? Peter, especially, could never have imagined that after his denial of Jesus, things would ever be the same again. But, in view of earlier transgression there were no recriminations, no talk of needed forgiveness, just expressions of love.

So often we think we recognise Jesus in our lives and indeed we do, but as we sit on the seashore sharing the breakfast he has prepared, he invites us, like Peter, to a new way of being. He invites me to a place deep within, a place I have never been before – that ‘no place’ where he dwells. At that still point, I am, what is.

For the past two years, Covid has kept us on stormy seas, but as things begin to ease in some respects, the trauma and grief linger on. Life will never be the same again, but we cannot go back. Perhaps it is from a place of great emptiness that this call to deeper intimacy is most often felt.

‘Now is the time: now is the acceptable time’ The call is ongoing The Lord still waits on the seashore to provide nourishment and support, as I open myself to the unknown. I am drawn ever deeper into mystery – a journey, not of the mind, but an undefined movement of the spirit beyond thought or reason.

Jesus says to me today “Do you love me? “If my response is, “Yes, Lord you know everything; you know I love you,” there are going to be implications. Am I ready, with an open heart, to accept these implications?

“The spirit stands on the lip of time
And beckons us to leave our past
And seek the future that’s within”
P. Purnell SJ

“Now is the time; now is the acceptable time.”

Where do I go from here?

At that time, Jesus revealed himself again to his disciples at the Sea of Tiberias. He revealed himself in this way. Together were Simon Peter, Thomas called Didymus, Nathanael from Cana in Galilee, Zebedee’s sons, and two others of his disciples. Simon Peter said to them, “I am going fishing.” They said to him, “We also will come with you.” So they went out and got into the boat, but that night they caught nothing. When it was already dawn, Jesus was standing on the shore; but the disciples did not realize that it was Jesus. Jesus said to them, “Children, have you caught anything to eat?” They answered him, “No.” So he said to them, “Cast the net over the right side of the boat and you will find something.” So they cast it, and were not able to pull it in because of the number of fish. So the disciple whom Jesus loved said to Peter, “It is the Lord.” When Simon Peter heard that it was the Lord, he tucked in his garment, for he was lightly clad, and jumped into the sea. The other disciples came in the boat, for they were not far from shore, only about a hundred yards, dragging the net with the fish.

When they climbed out on shore, they saw a charcoal fire with fish on it and bread. Jesus said to them, “Bring some of the fish you just caught.” So Simon Peter went over and dragged the net ashore full of one hundred fifty-three large fish. Even though there were so many, the net was not torn. Jesus said to them, “Come, have breakfast.” And none of the disciples dared to ask him, “Who are you?” because they realized it was the Lord.

Jesus came over and took the bread and gave it to them, and in like manner the fish. This was now the third time Jesus was revealed to his disciples after being raised from the dead.

Sister Theresa (Tess) Rynn was born in Lancashire, England, the fifth of six children. She entered the Sisters of Notre Dame de Namur, in Ashdown in 1956. She was a Primary School Head Teacher for some years and then moved into local leadership in the British Province, with particular care for the sick and elderly. Alongside this she was involved for many years on the Formation Team in the Province, working with the newer members of the Congregation. A time as Moderator in the Generalate in Rome, was followed by some years as Novice Director, after which she returned to local leadership for a time. She worked in School and Hospital Chaplaincy, and Child and Adult Hospices. In recent years she has served as Moderator of the Parbold Community and presently continues to be involved in Spiritual Direction and Retreat work 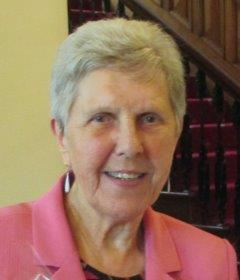