Carol Schuck Scheiber, editor of Horizons Journal of the National Religious Vocation Conference writes in their Winter 2020 edition: “Music lovers everywhere recognize that in pop songs (and songs in many other genres) a common theme is simple human longing for connection.  Connection – be it through friendship, kinship or romance – is hardwired into humans.  We sing it out in bars, basements and backrooms every day. For that very reason, the Catholic notion of accompaniment is rooted in the fiber of our beings.  Naturally, we seek connection, help, relationship and wisdom when we’re on the precipice of a big decision.”

I am struck by Carol’s phrases: connection and accompaniment. I see them shouting out at us from Luke’s account of the road to Emmaus.

The gospel starts out with the two disciples together on the road.  They were talking things over.  We all know the gift of a friend with whom we can feel free to talk and even debate as Luke says.  They needed to connect in their grief.  They needed to be accompanied. They were not travelling alone.

Many have experienced isolation during this international pandemic.  It has been so difficult for our elders and our sick especially those in health facilities.  Families and friends cannot visit, accompany others to doctor’s visits, say final goodbyes.  Funerals are limited when burying our dead. Children and teens, too, are not able to be with their friends. “Distance” is a bad word for them.  They long to connect.

Yet, so much has emerged as well.  Who could forget the haunting videos of people at their open windows singing to one another in the streets of Rome?  That novel idea was repeated in many cities.

Many teachers in the USA have been connecting with their students online. They have quickly learned new skills for all ages of students.  Teachers reading stories to little children, sharing skills and giving assignments to older children, lecturing and requiring papers from college students, teaching English online to adult immigrants. It is ingenious how schools have learned to connect and accompany!

Families, too, have learned new ways of being together while practicing safe skills of social distancing outside the home even as financial worries and insecurity abounds.

Who could ever have imagined on Ash Wednesday that we would be giving up Mass for Lent, Holy Week and Easter season?  Yet, our need for God to accompany us has not diminished and many have found new ways to pray and to let God connect with us even as we live our lives, pray and act for the safety of others and bury our dead.

Luke says, “Jesus himself drew near and walked with them.”  There it is again – connection and accompaniment!  Their hearts felt his presence and they said it “burned within us.”  Those disciples were walking away from Jerusalem.  They were disconnecting.  Jesus intervention got them to turn around, to return to Jerusalem, to accompany others and to be accompanied.

This pandemic will end but we will all have been changed.  We have witnessed the heroics of so many good people such as those in the medical professions.  God’s goodness is made visible in them.  Will we go back to how things were?  Or, will we turn around because of God’s grace?  Will we treasure connecting and accompanying others?

That very day, the first day of the week, two of Jesus’ disciples were going to a village seven miles from Jerusalem called Emmaus, and they were conversing about all the things that had occurred. And it happened that while they were conversing and debating, Jesus himself drew near and walked with them, but their eyes were prevented from recognizing him.

He asked them, “What are you discussing as you walk along?” They stopped, looking downcast. One of them, named Cleopas, said to him in reply, “Are you the only visitor to Jerusalem who does not know of the things that have taken place there in these days?”

And he replied to them, “What sort of things?” They said to him, “The things that happened to Jesus the Nazarene, who was a prophet mighty in deed and word before God and all the people, how our chief priests and rulers both handed him over to a sentence of death and crucified him. But we were hoping that he would be the one to redeem Israel; and besides all this, it is now the third day since this took place. Some women from our group, however, have astounded us: they were at the tomb early in the morning and did not find his body; they came back and reported that they had indeed seen a vision of angels who announced that he was alive. Then some of those with us went to the tomb and found things just as the women had described, but him they did not see.”

And he said to them, “Oh, how foolish you are! How slow of heart to believe all that the prophets spoke! Was it not necessary that the Christ should suffer these things and enter into his glory?” Then beginning with Moses and all the prophets, he interpreted to them what referred to him in all the Scriptures. As they approached the village to which they were going, he gave the impression that he was going on farther. But they urged him, “Stay with us, for it is nearly evening and the day is almost over.” So he went in to stay with them. And it happened that, while he was with them at table, he took bread, said the blessing, broke it, and gave it to them. With that their eyes were opened and they recognized him, but he vanished from their sight.

Then they said to each other, “Were not our hearts burning within us while he spoke to us on the way and opened the Scriptures to us?” So they set out at once and returned to Jerusalem where they found gathered together the eleven and those with them who were saying, “The Lord has truly been raised and has appeared to Simon!” Then the two recounted what had taken place on the way and how he was made known to them in the breaking of bread.

Sr. Eileen Burns is a member of the SND East West Province Leadership Team in the USA. She lives in Lawrence, Massachusetts where Sisters of Notre Dame de Namur have continuously lived and ministered since 1854. Eileen has degrees in biology and ministry.

She has worked in schools, parishes and with immigrants in the Notre Dame Education Center, Lawrence, MA. 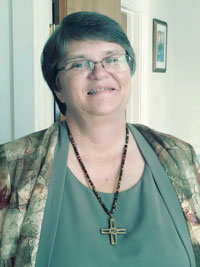