His interviewer asked the first question: “Who is Jorge Mario Bergoglio?” The pope stared at him in silence, so the interviewer asked him if this was a question he was permitted to ask. The Pope Francis then nodded that it was and said: “I do not know what might be the most fitting description. I am a sinner. This is the most accurate definition. It is not a figure of speech, a literary genre. I am a sinner.” (A Big Heart Open to God: A Conversation with Pope Francis. Interview by Antonio Spadaro, S. J., p. 7.)

Today’s Gospel (Luke 18:9-14) is a commentary on the proper disposition for prayer and, as such, presents a contrast between the wrong way and the right way to present oneself in prayer before God. While the Pharisee may well have done the good deeds of which he boasts, there is no awareness, no expression of gratitude to God for the grace to have accomplished them. Instead, the Pharisee makes both a comparison and a judgement. “I thank you that I am not like the rest of humanity – greedy, dishonest, adulterous “– and, notably here, he asserts that he is not like the tax collector. In one arrogant, sweeping, and all-inclusive statement, he has separated himself from “the rest of humanity,” being brother to none and superior to all.

How far adrift is his attitude from the perspective of Francis in his encyclical letter, Laudato Sí: On Care for Our Common Home, in which he shares his spiritual and moral vision of interconnectedness. Anchoring his vision in the Doctrine of Creation, he states that belief in God as the creator of all things is to say that all created things thus are members of one family in God. It is to see the diversity of creatures as expressions of the infinite goodness of God, God’s love, and boundless affection for us…. “The human person grows more, matures more, and is sanctified more to the extent that he or she enters into relationships, going out from themselves to live in communion with God, with others, and with all creatures. In this way, they make their own that trinitarian dynamism which God imprinted in them when they were created. Everything is interconnected and this invites us to develop a spirituality of that global solidarity which flows from the mystery of the Trinity.” To violate these connections, to separate oneself from them is to sin; separation is sin. (Quotation from Vincent Miller in his contributed chapter, “Integral ecology: Francis’s spiritual and moral vision of interconnectedness” to the book, “The Theological and Ecological Vision of Laudato Sí: Everything is Connected,” pp. 13-14.) Consequently, the logical conclusion is that any attempt to separate oneself from one’s loving connection to others, as exemplifies in today’s Gospel, by making self-satisfied comparisons of superiority and subsequent judgements, is to break faith with this interconnectedness.

In contrast, one of the humans the Pharisee has disavowed, reverently humbles himself in the presence of his Creator and begs: “O God, be merciful to me a sinner.” He well knows who he is in relation to God and to others. Doubtless, he knows, as well, that being a tax collector, he is in league with the enemy of the Hebrews – the Romans – and, as such, has exploited and cheated his Jewish brothers. He is aware of and sorry for his misdeeds, is ready to repair those broken connections, and relies on the grace of God’s mercy to do so.

When next we place ourselves before God in prayer, as well as anytime we catch ourselves, we will want to turn off the temptation to engage in comparisons of any kind – “which are always odious,” as a beloved directress of postulants was wont to say. We might be comparing ourselves to others who are worshipping with us, to those with whom we may have recently had a disagreement, the list goes on. May we recognize that this is a very slippery slope and needs to be avoided at all costs, with great self-discipline and, always, the grace of God.

A comment frequently heard relative to the issue of why more people do not attend or have discontinued attending Mass is that it is because “Catholics are so judgmental”! Maybe we can all consider how “rule driven” like the Pharisees we may be, and thereby setting ourselves apart “from the rest of humanity.” The Pharisees were certainly quite knowledgeable about, and self-satisfied with, their observance of the Hebrew laws but were, surely, less humane whereas Jesus, who was criticized for breaking the laws: of the sabbath, of ritual and social purity, of blaspheming and associating with sinners, manifested the relational love of our good, triune God. May we adopt the humility and humanity of the tax collector and of Pope Francis, and pray,

Jesus addressed this parable to those who were convinced of their own righteousness and despised everyone else. “Two people went up to the temple area to pray; one was a Pharisee and the other was a tax collector. The Pharisee took up his position and spoke this prayer to himself, ‘O God, I thank you that I am not like the rest of humanity — greedy, dishonest, adulterous — or even like this tax collector. I fast twice a week, and I pay tithes on my whole income.’ But the tax collector stood off at a distance and would not even raise his eyes to heaven but beat his breast and prayed, ‘O God, be merciful to me a sinner.’ I tell you, the latter went home justified, not the former; for whoever exalts himself will be humbled, and the one who humbles himself will be exalted.”

Sister Jo Ann Recker, SNDdeN is a professor emerita of French and French Literature in the Department of Modern Languages at Xavier University, Cincinnati, OH. She received her doctorate in Romance Languages and Literatures from The Ohio State University. A student of the Sisters of Notre Dame de Namur for 12 years at Mt. Notre Dame, she entered the community in 1960 and taught in Notre Dame high schools for 12 years. After teaching and serving as Program Coordinator in the Department of Romance Languages and Literatures at Ohio State for 11 years, she taught and served as Department Chair of Modern Languages for 15 years at Xavier University where she was for 27 1 /2 years. In addition to co-authoring the college-level French text, Situations et Contextes, she has also published a monograph on the seventeenth-century writer Madame de Sévigné, “Appelle-moi Pierrot”: Wit and Irony in the Letters of Madame de Sévigné (Peter Lang) and two books on the co-foundress of the Sisters of Notre Dame: Françoise Blin de Bourdon: Woman of Influence (Paulist Press) and “Très affectueusement, votre mère en Dieu”: Françoise Blin – French Aristocrat, Belgian Citizen, Co-Foundress of the Sisters of Notre Dame de Namur (Peter Lang Publishing). A trained spiritual director, she has given presentations on spiritual topics as well as on the value of foreign-language learning, foreign-language teaching strategies, and literary topics. She has been named Xavier University’s Bishop Fenwick Teacher of the Year and was recipient of the Ohio Foreign Language Association’s Professional Publications Award. Currently, she serves in two parishes as a sacristan, lector, Eucharistic Minister in one, and as a facilitation of adult bible studies in the other. As a student, she was always attracted by “Mère Julie’s” spirit of joy, a joy grounded in her complete confidence in and abandonment to her Good God.” 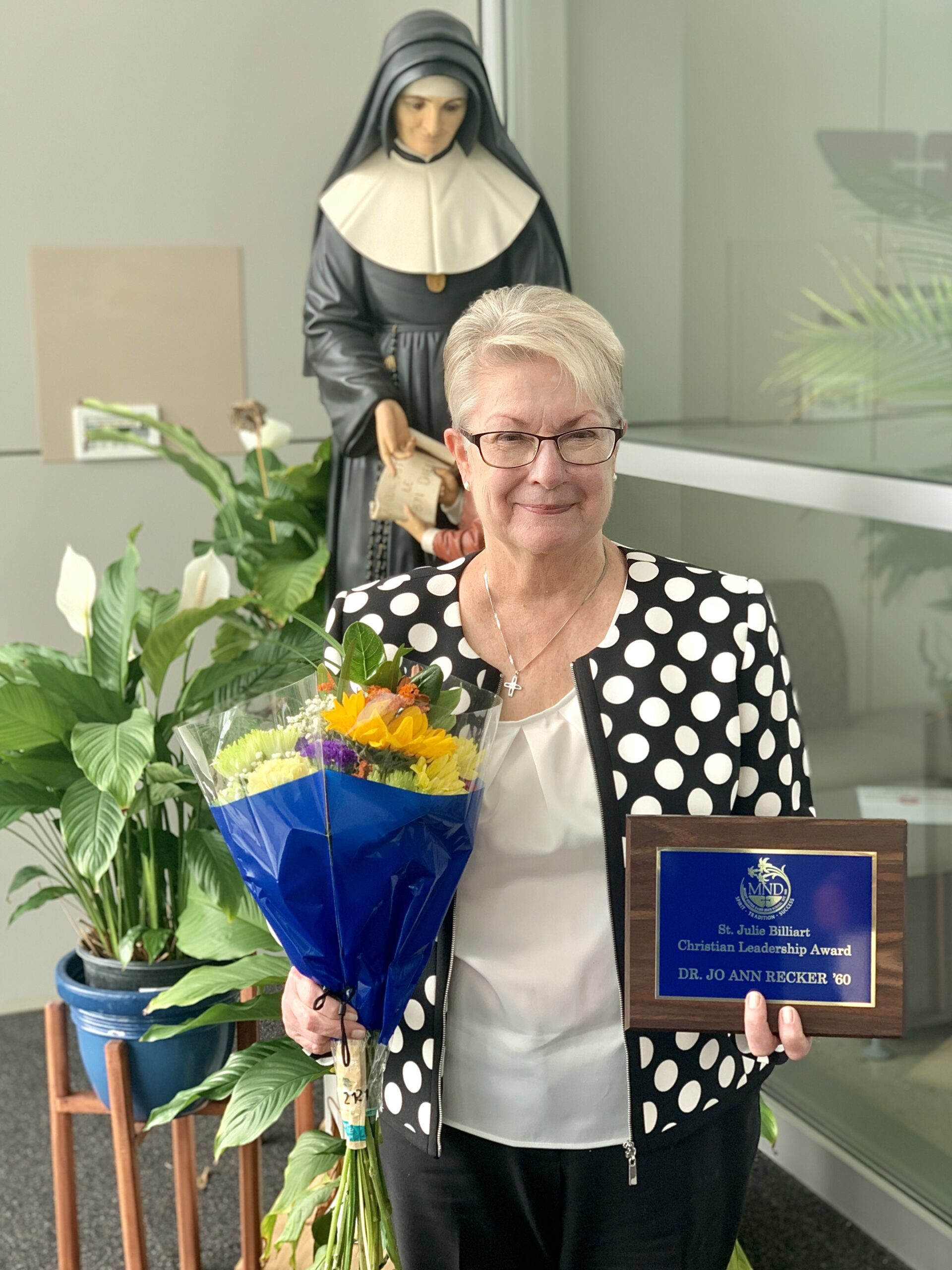