The readings for the Twenty-Ninth Sunday revolve around perseverance and they offer a study in why we need to discern situations. The Gospel verse is “The word of God is living and effective, discerning reflections and thoughts of the heart.”

The Old Testament is filled with battles where one group is annihilating another in the name of their god. Survival was the dominant value for centuries.   Who one listened to was often the factor in victories.  Joshua did as Moses told him.  One major gift that Christianity offers to other religions is the gift of discernment. Vatican II encouraged the study of Sacred Scripture and Tradition to ensure that ancient mentalities would not prevail for millennia.   Recognizing the signs of the times and reflecting on what we are being called to be and to do cautions us that blood and vendetta should not prevail among peoples.

“Pray aways without becoming weary.”  The Gospel parable reflects two different views of a particular virtue/attitude depending on how you consider the judge and the woman.

Perseverance and stubbornness can be two aspects of the same quality.  Persevering in an attitude can reap benefits in many situations, but steadfastness in the face of new information, refusing to consider other factors which might influence our thinking can develop into stubbornness.  The judge in Jesus’ parable had definite ideas about who he was dealing with and how he wanted to rule, since he “neither feared God nor respected any human being”. Moses, Amalek, St Paul, Timothy and the judge all had to use discernment in their situations.

The woman also exhibited perseverance in her request, but she was presenting herself against someone who was her stronger adversary which led her to a court.  What distinguishes perseverance from stubbornness and refusal to change? When does either quality become a rut or then develop into a grave that cuts off all life/growth, especially when decisions affect others?  Catholic social teaching proclaims that the “common good” and the human rights of all people are measures of our actions, not personal gain, glory, or an effort to “save face” when we hold onto opinions that don’t sync with the reality around us. “Will not God then secure the rights of his chosen ones who call out to him day and night? Will he be slow to answer them? I tell you; he will see to it that justice is done for them speedily.”

“Remain faithful to what you have learned and believed, because you know from whom you learned it.”  Abraham Lincoln, a former US President, observed that we shouldn’t pray for God to be on our side; we should pray that we are on God’s side!

Jesus told his disciples a parable about the necessity for them to pray always without becoming weary. He said, “There was a judge in a certain town who neither feared God nor respected any human being. And a widow in that town used to come to him and say, ‘Render a just decision for me against my adversary.’ For a long time the judge was unwilling, but eventually he thought, ‘While it is true that I neither fear God nor respect any human being, because this widow keeps bothering me I shall deliver a just decision for her lest she finally come and strike me.'”
The Lord said, “Pay attention to what the dishonest judge says. Will not God then secure the rights of his chosen ones who call out to him day and night? Will he be slow to answer them? I tell you, he will see to it that justice is done for them speedily. But when the Son of Man comes, will he find faith on earth?”
The Gospel of the Lord

Sister Maria Delaney has been a Sister of Notre Dame de Namur for 58 years. Her professional background includes secondary teaching and administration and ten years as the Executive Director of the Notre Dame Education Center in Boston. For twelve years, she was based in Rome Italy as a member of the Notre Dame de Namur Congregational Leadership Team. In this capacity, she had the privilege of visiting the Sisters on five continents. She has also spent several years on the Board of Directors of the International Catholic Education Association which gave her the opportunity to visit many Catholic schools around the world, especially those in poorer countries. For the past seven years, she ministered as Director of the US Office of Sponsored Ministries, working with the schools and health centers in the US that carry the Sisters of Notre Dame de Namur name and collaborating with other Notre Dame schools worldwide. She is currently holding a temporary position as her Sisters’ NGO Representative at the United Nations. 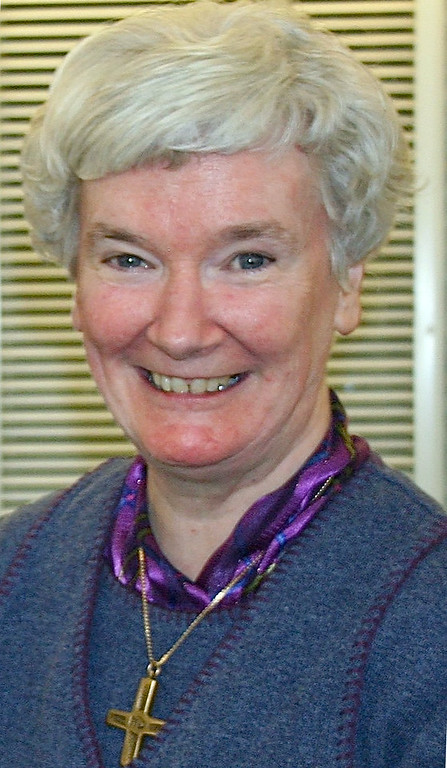