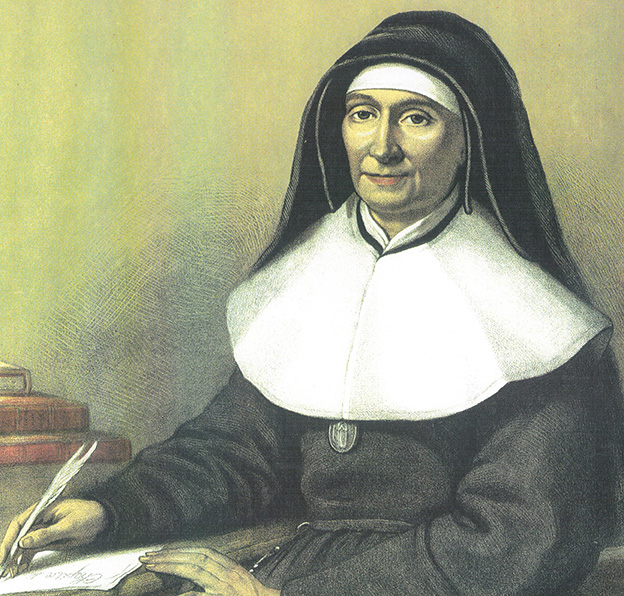 Françoise Blin de Bourdon, a wealthy French noblewoman and a close friend of St. Julie Billiart, co-founded the Sisters of Notre Dame de Namur. She wrote the “Memoirs” that tell us so much about St. Julie and the early history of the Congregation. Françoise also provided a spiritual foundation by writing the first “Rule,” which described the spirit of the religious congregation and the way of life for the Sisters. She was the Congregation’s first “donor,” providing the financial support from her family inheritance which enabled the Sisters to expand during the early years. She succeeded St. Julie as the superior general (worldwide leader) of the Sisters of Notre Dame de Namur.

Françoise grew up with a doting grandmother, a home on a luxurious estate, and access to the upper echelons of 18th-century French society. What happened to the luxury-loving society woman? She had heard God’s constant invitation to a deep relationship with Him, and she said “yes.”

That “yes” led her to St. Julie Billiart who, paralyzed and bedridden, was a guest in the home of Françoise’s brother in Amiens. At first, Françoise found visiting the sick woman distasteful. Gradually a strong friendship grew between them. With St. Julie’s guidance, she spent her whole life “letting go” of anything that could come between her and God. Before her death, she had given away all her material goods.

Have you ever had a narrow escape?

Françoise, whose family belonged to the French aristocracy or nobility, had been presented at the court of King Louis XVI and Marie Antoinette in Versailles! French revolutionists imprisoned and guillotined the king and queen. Then they began executing members of the aristocracy and clergy. Françoise herself was imprisoned, while awaiting execution. Just one day before her date with the guillotine, Maximilian Robespierre, the mastermind of the French Revolution, fell from power, and Françoise was freed.

Do you know right away whether you want to be friends with a new acquaintance? Françoise was not at all sure about her new acquaintance, Julie Billiart. A bedridden paralytic, Julie experienced great difficulty in speaking. At times, it was hard to understand her speech. But she spoke often of God as a person who knew him well. Fascinated by Julie’s wisdom and closeness to God, Françoise kept coming back to be with her.

The friendship between the two women developed, and Françoise found herself confiding in Julie about her own relationship with God. When they were unable to talk face-to-face, they wrote frequent letters to each other.

In those letters, Julie often calls Françoise “my dear friend in the Lord.” That “friendship in the Lord” was the foundation of the Sisters of Notre Dame de Namur. On February 2, 1804, the day that the Sisters consider as the “birthday” of the Congregation, Julie, Françoise, and Catherine Duchâtel consecrated themselves to God. Later, they professed vows of poverty, chastity, and obedience as Sisters of Notre Dame on October 15, 1805. Françoise, whose name as a religious was Sister St. Joseph, wrote the first biography of St. Julie, the first history of the Sisters of Notre Dame de Namur. Mother St. Joseph became the second superior general (worldwide leader) of the Congregation.