The spiritual experiences which are lived day after day teach us that God, who directs everything in wisdom and goodness, wills that the world be saved; God uses the small and weak ones in order that all may recognize the strength and love of God. 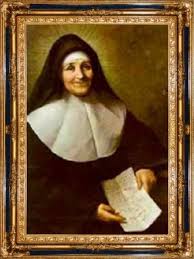 Julie Billiart, born in Cuvilly 1751 and deceased at Namur in 1816, was one of those humble women chosen by God to make known his goodness. This countrywoman experienced poverty, hard work in the fields, and twenty-two years of paralysis. But at the same time, she also experienced the goodness of God. Her priest, Abbe Dangicourt, opened up to her the ways of prayer and admitted her at the age of nine to frequent communion. Filled with love for God and God’s people, she communicated something of this flame to all those whom she met: children in religious instruction, customers in a family shop, farmworkers with whom she harvested, royalty on vacation. Having taken refuge in Compiegne during the Reign of Terror, deprived of the sacraments, paralyzed, suffering from a shock to her nervous system, she had nothing but God. And God communicated with her, showing her the Crucified one surrounded by numerous religious: “Here are the daughters whom I am giving you in an Institute which will be marked by my Cross.” 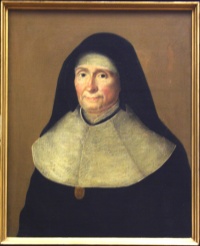 Other young women, attracted by the dynamism of the first Sisters, joined them. The Fathers of the Faith worked with them on a large mission which had been organized for all the parishes of Amiens. Fr. Enfantin began a novena to the Sacred Heart to obtain a cure for Julie, and she prayed with him “for the person in whom I am interested.” On Friday, June 1, 1804, the fifth day of intense prayer, Fr. Enfantin said to Julie, “Mother, if you have faith, take one step in honor of the heart of Jesus – and a second – a third – that’s enough, sit down.” Only on June 5 was she able to show her cure to the community. “TE DEUM LAUDAMUS!”

Her health restored, Julie undertook numerous apostolic trips and made the first foundations: St. Nicolas in the Diocese of Ghent, and Bordeaux, where one community sought to join with the Sisters of Notre Dame in 1806, Montdidier and Namur in 1807, Jumet in the Diocese of Tournai in 1808.

In 1794 she met Francoise Blin de Bourdon (Born at Gezaincourt 1756 – Died at Namur 1838). This meeting took place in her hotel in Amiens. This was the start of an indestructible friendship. An initial group of young women gathered around the two friends – then the group dissolved. Francoise dreamed about Carmel… Julie waited. 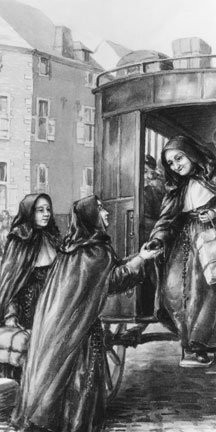 Father Varin of the Fathers of the Faith asked Julie and Francoise to dedicate themselves to the Christian instruction of young poor girls.

On February 2, 1804, Julie Billiart, Francoise Blin de Bourdon, and Catherine Duchatel made or renewed the vow of chastity and began their work on the Christian instruction of young poor girls. They promised God “to form school teachers for the country areas.” In order to witness to her love for the Virgin Mary, Julie consecrated her new religious family to Mary as the Sisters of Notre Dame.

These trips were seen in a bad light by Monsignor Demandolx, the Bishop of Amiens, who was influenced by the Sisters’ superior, Abbe de Sambucy de St. Esteve. For two years a conflict fed by all kinds of mean behavior continued. The central question was the type of government, which the Sisters of Notre Dame would have. The bishop wanted the order to be limited to a diocesan congregation, indeed, even to the one house at Amiens. The foundresses for their part, wished to have the freedom to found many communities under the authority of a Superior General, who would maintain unity and solidarity among them. Financial interests sometimes lead to quarrels: Mother St. Joseph (Françoise Blin de Bourdon) had invested her fortune in the congregation, and some people wished her revenues to remain at Amiens.

Supported by the Bishops of Ghent and Namur, Julie remained patient, waiting for a clear sign of God’s will. In January 1809, Monsignor Demandolx told Mere Julie that he would take back the house at Amiens, and that she was free to go to the diocese of her choice. She was in exile. Nearly all the Sisters followed their Mothers to Namur. From then on they became Sisters of Notre Dame de Namur. 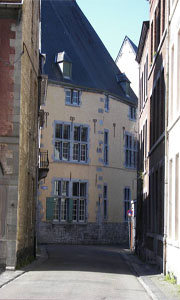 “‘Today here, tomorrow elsewhere,’ the whole earth is the Lord’s, and all should be the same to Sisters of Notre Dame, who have the happiness of following their divine Master.” In order to carry the light of Christ even further, Julie never hesitated to go where she was called, striving to discern the will of the good God.

It was thus she founded the communities of Gand (St. Pierre) and St. Hubert in 1809, Gand (Nouveau Bois) in 1810, Zele in 1811, Adenne and Gembloux in 1813, Fleurus in 1814, and she prepared the foundations of Liege and Dinant. On the other hand, the trips of Binche, Breda (Pays Bas), Rochefort, Audenaerde, and Stavelot did not yield positive results.

Monsignor Demandolx regretted having sent Julie away. In fact, he recognized that he had been fooled. He called her back in 1812. Despite all his efforts, the foundress never re-established the community at Amiens, and the house was closed in 1813. Shortly after, it also became necessary to close Montdidier, as well as some other small communities in France.

When, on April 8, 1816, Mere Julie peacefully gave back her soul to God, “her good Father,” the sapling which she had planted, then transplanted in Namur was firmly rooted in Belgian soil. Meanwhile, the Bishop of Ghent, Monsignor de Broglie, had prophesied a global expansion: “Mother Julie, your vocation is to go throughout the world.”

Mere St. Joseph continued the work which had been undertaken. She edited, then obtained approval for, the Rule (1816—1818). She welcomed Dutch postulants who became Sisters of Notre Dame of Amersfoort; these, in turn, guided the first Sisters of Notre Dame of Coesfeld. Mother Saint Joseph opened many more houses in Belgium. With Mere Ignace and the superiors general who followed, expansion continued: the United States (1840), England, Guatemala, Congo, Rhodesia, Orange State, Japan, China, Italy, Hawaii, France, Nigeria, Kenya, Brazil, Peru, Mexico, Nicaragua. Everywhere the Sisters of Notre Dame were appreciated, for everywhere there are orphans, illiterate people, pagans, the poor, and the deprived to whom the Sisters offer their services. Aware of the needs of the people to be served, they remain always and everywhere solicitous about education: “Go out to the whole world; teach them to observe all the commands which I have given you.”

Thus the daughters of Julie can sing with confidence:

“The Lord has blessed the mustard seed
And high into the sky the tree has grown.
‘Ah, how good is the Good God!’
The earth and the heavens proclaim
From one end of the earth to the other.
May our apostolic cry be heard.” 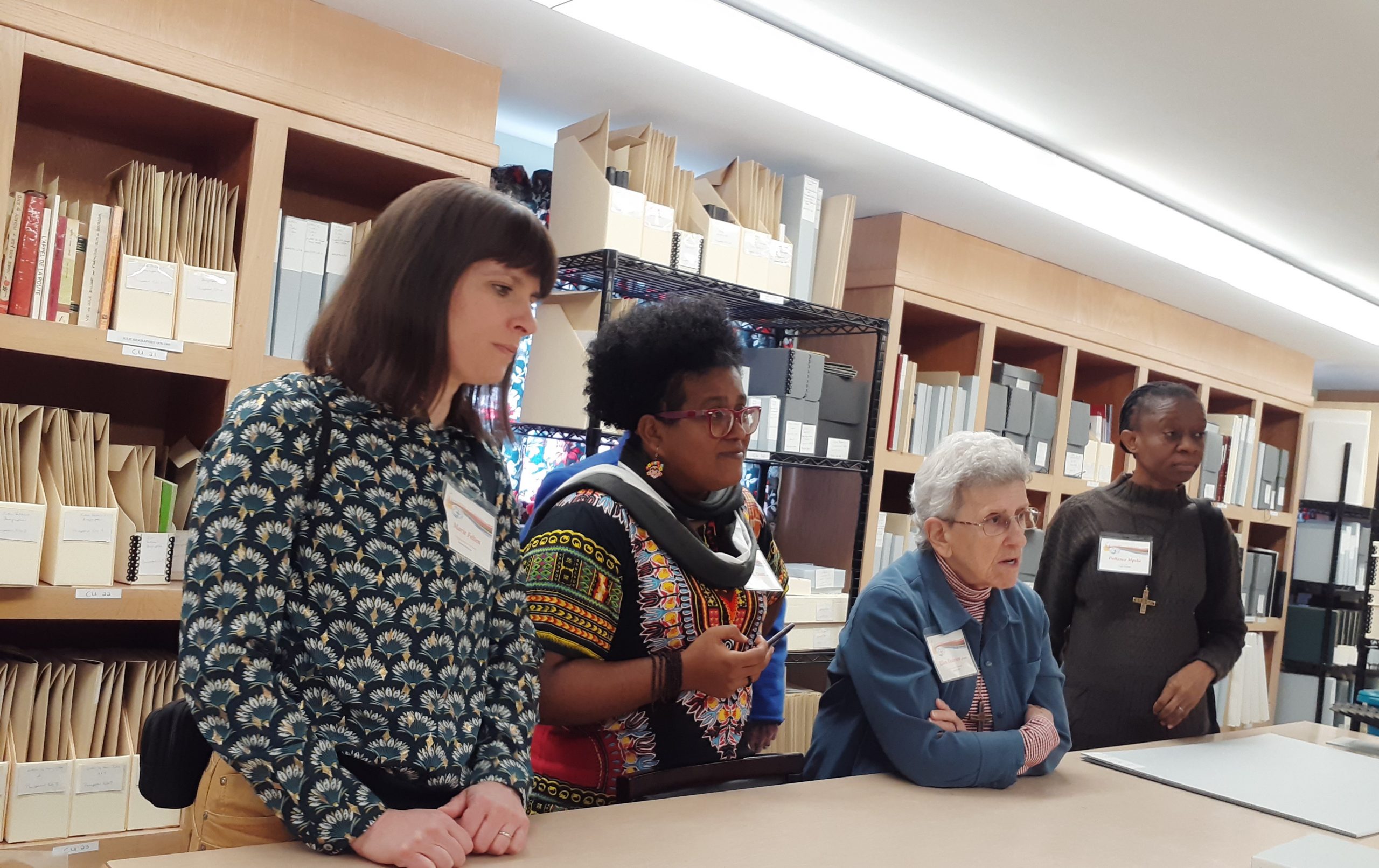