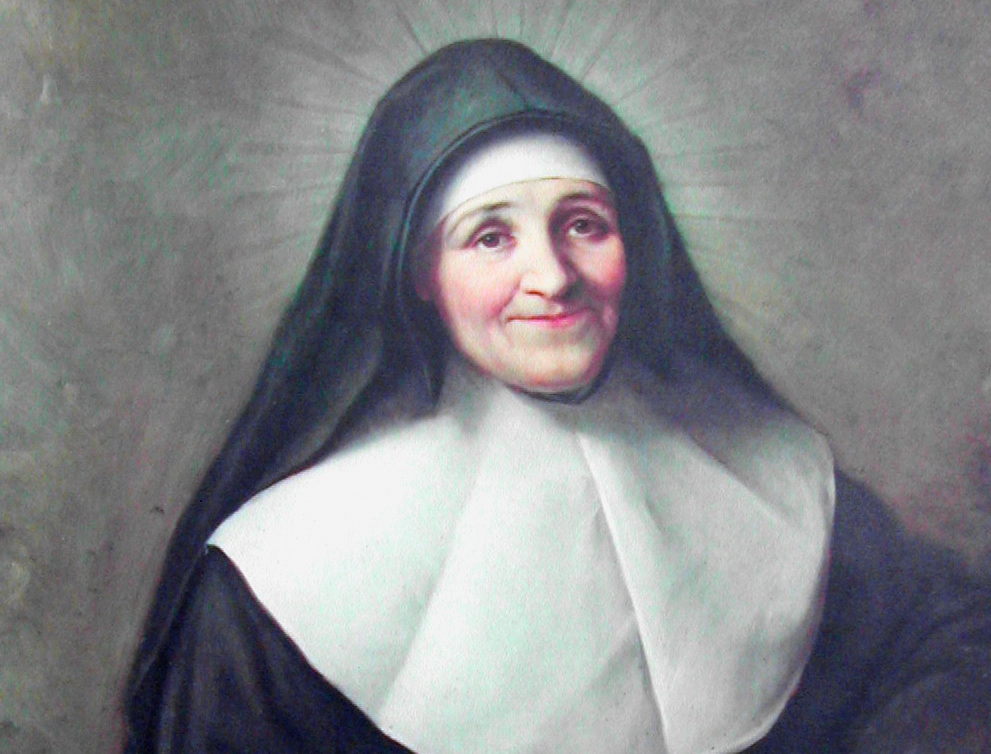 Who is Saint Julie Billiart?

Sisters of Notre Dame de Namur consider their Foundress, St. Julie Billiart, “a saint for our times” and in all times! She lives today in the minds and hearts of multiple women, men and children throughout the Globe! She is surely a woman of our modern era who showed courage through action, in transforming differences and inequities of her time through the ministry of education!

What is her story?

In the small village of Cuvilly, north of Paris, France, Marie-Rose Julie Billiart, born on July 12, 1751, was the seventh of nine children of Jean-François Billiart and Marie-Louise Antoinette Debraine.  Most of her siblings died in infancy and adolescence.  Raised by strong Christian parents, her elder sister, Madeleine and younger brother, Louis-François married and nurtured good Christian families.  Marie-Rose Julie, even as a child, heard a call in the whisperings of God within her, and she shared her beliefs and deep love of God by teaching other children in the village. Although an ordinary child in so many ways, the mark of the cross was a distinctive sign of her inner spiritual greatness.  Suffering often accompanied her in the family losses, with the robbery of her father’s shop, and her illness brought about by shattered nerves after an attempt on her father’s life (1774).  Poor medical treatment in 1782 resulted in the paralysis of her legs.

During her early adulthood, many of the women in the region of Picardy recognized Julie’s spiritual gifts and often sought her insights and inspiration, around her bed!  They became her friends in these troubled revolutionary times. Later, Julie would recognize God’s call in her sufferings and her friendships, as well as in the signs of her time, in her country devastated by political and religious upheaval, violence and ignorance. With the French Revolution breaking out in 1789, restrictions became imposed by the Civil Constitution of the Clergy, requiring priests to take an oath to the government, not the Church. Priests refusing to do this were considered non-juring priests and hunted by authorities. The curé Dangicourt, Julie’s parish priest, was one of those priests, sought by revolutionists and protected secretly by Julie. The friends of Julie, who belonged to the nobility, helped these priests and Julie.  For about a year, Julie and her niece Félicité stayed in the château of Madame de Pont-l’Abbé in Gournay-sur-Aronde.  When revolutionaries surrounded the château, Julie and her niece escaped in a hay cart to Compiègne in 1792 where she suffered even more with the loss of speech. While in Compiègne, Julie experienced more anxiety and fear in this de-christianized city, occupied by many troops, and from the dispelling of her friends, the Carmelites, driven out of their convent. Sixteen of these Sisters would later be guillotined in Paris! 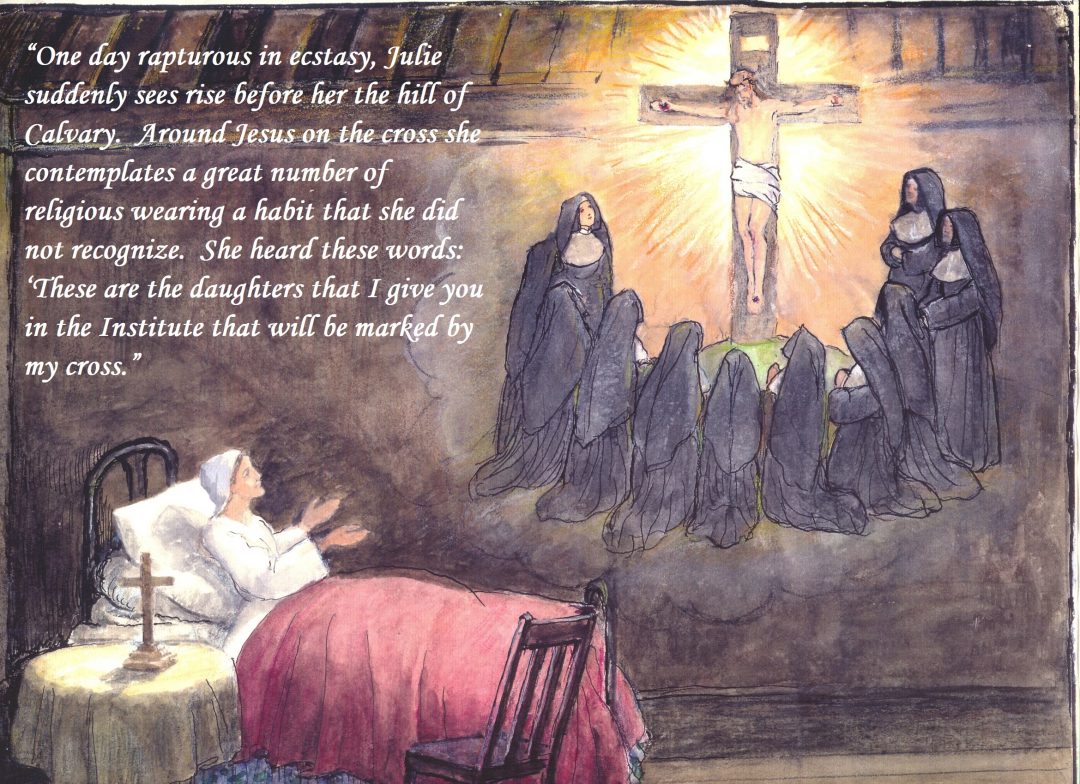 Yet, it was also somewhere in Compiègne that Julie had a vision of women around a cross and heard a call from God for a future religious Congregation.  She heard these words: “These are the daughters that I will give you in an Institute, which will be marked by my cross.” She held onto this experience as a guide for her future.  In October 1794, she went with Félicité to Amiens, at the request of another friend, a countess, Madame Baudoin whose father and husband had been guillotined by the revolutionaries.

Madame Baudoin believed a crippled Julie would help her to live with her terrible suffering and loss. She rented an apartment in the Hôtel Blin de Bourdon in Amiens for herself and her three daughters and a room for Julie.  In this room, owned by the family of Blin de Bourdon, a long, lasting and significant friendship with the Viscountess Françoise Blin de Bourdon began.  Madame Baudoin suggested that Françoise visit Julie.  At first, Françoise was repulsed by the paralyzed Julie and her inability to speak. Yet, she continued to visit Julie and discovered the depth and genuine spirituality of this suffering woman. With time, from 1794-1795, Françoise began to realize the call of God to her in this friendship for the Gospel and eventually for the Church.  At this same time, Madame Baudoin met the Abbé Thomas, who was also hiding and ministering in Amiens.  He began to visit Julie with spiritual support and the Eucharist at the Hôtel Blin.  Françoise, during 1795 and 1797, spent time settling her grandparents’ estate at Gézaincourt (Baroness de Fouquesolles) and in caring for her ailing father in Bourdon until his death. The written correspondence between Julie and Françoise gives evidence of their bond of friendship, strengthened during those years.

In 1797, a new Reign of Terror broke out against the nobility and the priests who refused allegiance to the Civil Constitution. The Abbé Thomas just escaped attackers in 1799. Julie, Félicité, Françoise and the Abbé Thomas fled from Amiens to a chateau in Bettencourt until their return to Amiens in February 1803.   It was in Bettencourt that Julie met Fr. Varin, Superior of the Fathers of the Faith, in his visit to the Abbé Thomas. It was in Bettencourt also that Julie’s call at Compiègne began to take root in her teaching of the faith to young people and the confirmation of her mission by Fr. Varin and others.  The small community moved into a small residence on the Rue Puits-à-Brandil in February and then, on August 5, 1803, to a larger space on the Rue Neuve in Amiens.  Fr. Varin entrusted the care of some young orphans girls to Julie and asked her to find young women who would care for them without any attention to birth or fortune. On February 2, 1804, three women, Julie Billiart, Françoise Blin de Bourdon and Catherine Duchâtel committed themselves to God by a vow of chastity and the care and education of young girls.  This was the founding day of the Sisters of Notre Dame in Amiens, France!

(The coup d’état by Napoléon in 1799 signaled the end of the French Revolution.  The Concordat of 1801 finally gave freedom to the Church!)

Cure of Julie and the Mission Evolves

After 22 years as a cripple, Julie miraculously regained her power to walk after she made, unaware of the specific intention, a novena to the Sacred Heart of Jesus in late May 1804.  On the fifth day, on June 1, 1804, Fr. Enfantin directed her to stand and to take steps in honor of the Sacred Heart of Jesus.  He instructed Julie not to tell anyone yet.  Her Sisters and the children saw her walking down the stairs some days later at the Rue Neuve. After her cure, she accompanied the Fathers on a successful mission in June to St. Valery-sur-Somme and Abbeville! 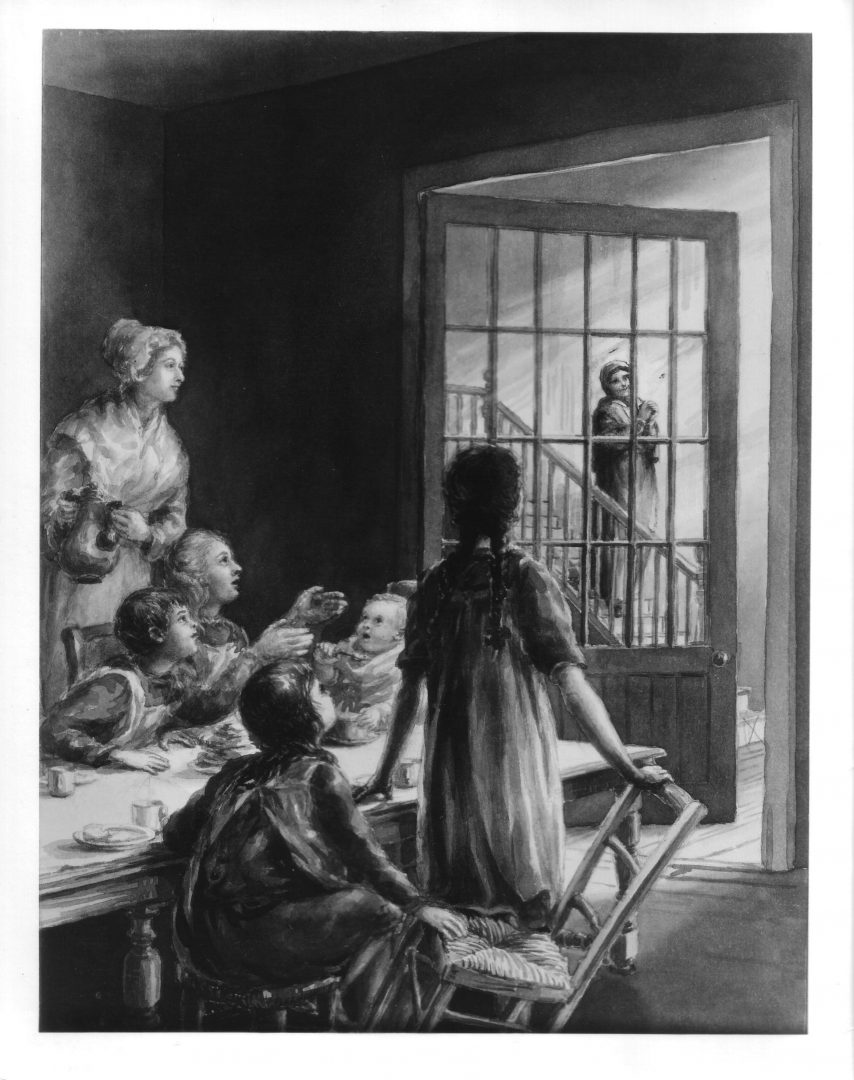 Julie did experience another vision in Amiens on February 2, 1806 when she saw her Sisters as a “light of revelation” going across the seas to other parts of the Globe!  For the years following, Julie walked many roads in France and Belgium in founding communities of her Sisters and schools for young girls deprived of education at the time. The cross continued to mark her life: in Amiens, abbé de Sambucy did not approve of Julie’s travels and foundations and he influenced Msgr Demandolx against her.  In 1809, the Sisters moved from Amiens, France to Namur, Belgium where their house existed since 1807: Msgr Pisani welcomed them; the Congregation became the Sisters of Notre Dame de Namur. In 1812, Msgr Demandolx realized his error and called Julie back to Amiens, but she could not maintain the houses in France. In Belgium, Julie established schools to prepare poor children for their duties in life. She saw education for everyone as a basic human right, and teaching as the “greatest work on earth.” She brought the good news and hope in the goodness of God to a depressed and deprived generation by preparing vulnerable children for their duties in life, when children cried out for survival. Some priests and some Sisters suspected Julie of being unfaithful to the Church. Julie died on April 8, 1816.  She did not live to go beyond continental Europe but her religious Congregation serves today in a variety of ministries, with a priority for education, in 16 countries on five continents.

On June 22, 1969, the Church recognized the Sainthood of Julie Billiart, Foundress of the Congregation of the Sisters of Notre Dame de Namur, in a liturgical celebration of her Canonization at the Vatican in Rome.  Pope Paul VI declared to all the world Julie’s holiness of life and her legacy of making known God’s goodness, given to our apostolic religious Congregation and to others who claim her as Foundress in our Mission. Sisters, Associates, Mission Volunteers, alumnae/alumni, administrators, faculty, students, staff in all our schools, colleges, universities, hospitals, clinics, centers, parishes and social agencies celebrate Julie’s Sainthood. 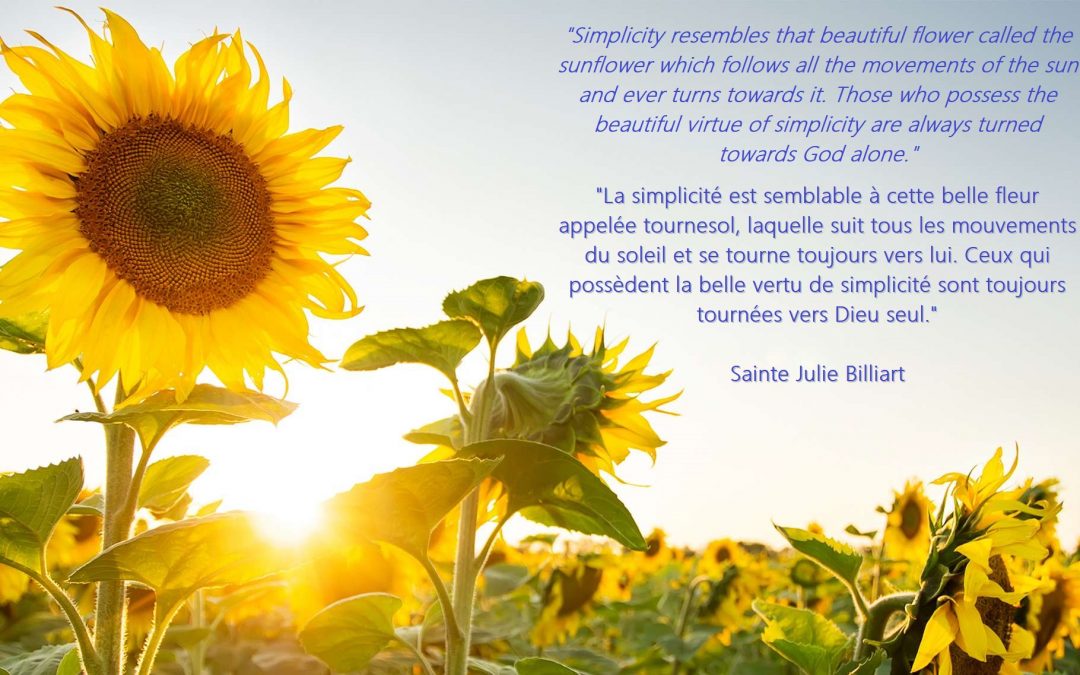 She was a woman of the modern era who took courage through action in confronting through the ministry of education the inequalities of her time. She recognized the need for basic human rights of life, liberty and equality of persons, proclaimed in the aftermath of the French Revolution. She demonstrates the power and presence of a loving and caring God in her person and in the women who have followed her as Sisters. Julie sent her Sisters to reach out to people “in the most abandoned places,” to give them tools for life, to change lives, dismantle unjust systems and to alleviate poverty through education. St. Julie’s charism, is expressed in her words:“Oh! How good is the good God.”  She speaks through her Sisters to another generation in the 21st century!

You are invited… to love, to lead and to act!